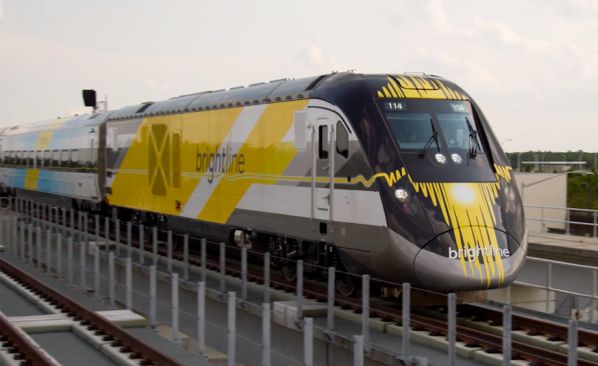 The first Brightline train arrives at the new station at Orlando International Airport.

THE first Brightline train arrived for testing at the new Orlando International Airport (OIA) station on May 17. After testing, the train returned to Brightline’s vehicle maintenance facility south of the airport.

Brightline says that the $US 2.7bn, 273km extension to its original 108km Miami - West Palm Beach line north to Orlando is nearly 80% complete with construction expected to finish by the end of the year. Services are due to start in early 2023.

Daily crew training and test running started in January between West Palm Beach and Cocoa, where the new line to Orlando branches off the existing Miami – Jacksonville main line. The maximum speed on the new line will be 200km/h

Brightline ordered five new trains from Siemens Mobility to help serve the extension. The first was delivered from the manufacturer’s plant in Sacramento in October 2021. Each train comprises four coaches with a Charger diesel-electric locomotive at each end. All the trains are scheduled to be delivered by the middle of this year.

Brightline held a ground-breaking ceremony for a new station at Boca Raton earlier this year. The station is located between Fort Lauderdale and West Palm Beach and is expected to be completed later this year.