Eventually there will be six TBMs tunnelling under the British capital. 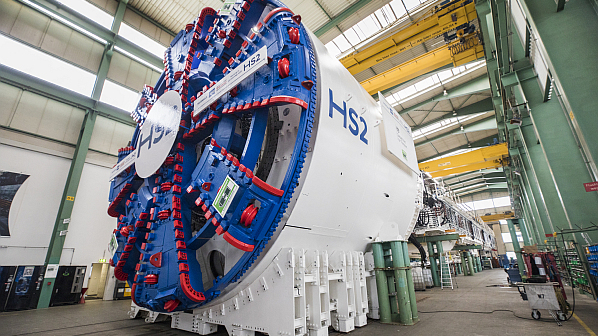 The first two HS2 TBMs for tunnelling under London have arrived in the capital.
Photo Credit: HS2 Ltd.

THE first tunnel boring machines (TBMs) that will be used on the new HS2 line in London have arrived on site ahead of the start of tunnelling next year.

HS2 Ltd confirmed that the main works civils contractor, the Skanska Costain Strabag joint venture, has already begun assembling the 1900-tonne TBMs ahead of their launch. Eventually there will be six TBMs working from West Ruislip, west London.

Herrenknecht built the TBMs in Schwanau, Germany. The plan is for the six TBMs to bore 20.9km of twin bored tunnels for the new London - Birmingham high-speed line which is due to open in 2029-2033.

The TBMs have been designed specifically to bore predominantly through Lambeth group (a set of geological rock strata), chalk and London clay, and have been automated to each install 4220 tunnel segments. Each TBM will require 15 people working on them at any one time, with work only stopping at Christmas and Easter.

The construction of HS2’s London tunnels will take four years.

Work is also underway on the first of 56 beams which will support the 3.4km Colne Valley viaduct, the longest on the London - Birmingham section, and Britain’s longest rail bridge. The first pier was cast by engineers from HS2’s main works contractor Align JV, comprised of Bouygues Travaux Publics, Sir Robert McAlpine and Volker Fitzpatrick, working with Kilnbridge.