The government is also looking to address a shortage of freight locomotives. 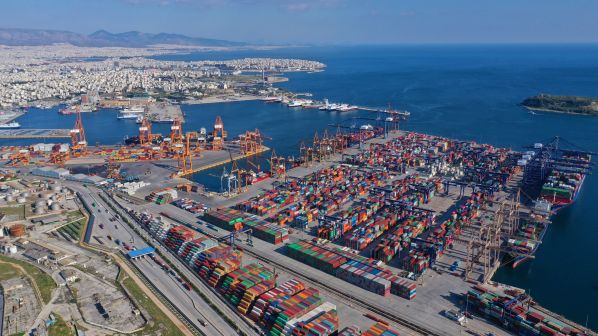 The government plans to reinstate rail connections to major ports at Thessaloniki, Volos and Kavala, following significant investment in the connection with the port at Piraeus.
Photo Credit: Shutterstock/Aerial-motion

GREEK deputy minister of infrastructure and transport, Mr Giannis Kefalogiannis, has outlined plans to invest in the country’s rail network, with a major focus on supporting growth in rail freight from ports.

The plans, some of which are subject to EU funding, include reinstating rail connections to Greece’s major ports at Thessaloniki, Volos and Kavala. The country’s largest port at Piraeus has already seen significant investment in its rail connection from its owner, Chinese shipping line Cosco, after it was privatised in 2016.

Cosco and other shipping lines have promoted Piraeus as an alternative to the North Sea ports such as Hamburg, as a sea journey from Asia to Greece is eight to nine days shorter. Containerised traffic via Greek ports increased by more than 4.5 times by weight from 2009, when Cosco took over operation of Piraeus on a concession basis, to 2016, when the port was sold.

The government also plans to introduce a new 10-year track access charging regime to provide cost assurance for freight operators. The new charging approach will be based on marginal costs, and will aim to increase rail’s share of freight. Existing plans to introduce ERTMS on main TEN-T routes connecting Greece’s ports with the rest of Europe are also seen as critical in enabling freight traffic to increase.

The lack of train drivers and suitable locomotives in Greece, attributed to years of under investment, currently makes starting new freight services difficult. Kefalogiannis announced that the Greek government is planning to invest in new freight rolling stock via the state-owned Gaiaose rolling stock leasing company, and is in discussions with international investors concerning investments in rolling stock maintenance facilities.

The government also wants to see the development of modern freight and logistics centres, as there are currently no such facilities in Greece. Two major sites are planned: the rail-connected 235,000m2 Thriasio Logistics Centre west of Athens, which will have intermodal and logistics parks; and the Gonou Logistics Centre to be built on a 672,000m2 plot near Thessaloniki’s port.