The line will connect the Simandou iron-ore deposit with the Atlantic coast. 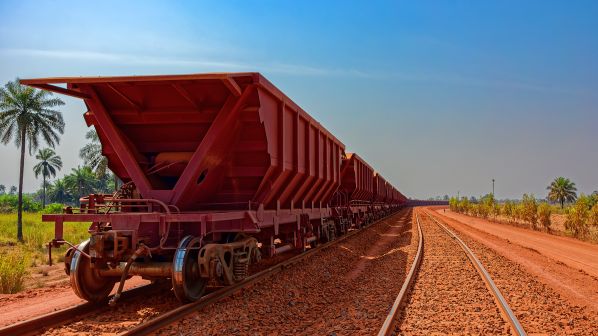 THE government of Guinea has signed a framework agreement with Rio Tinto and Winning Consortium Simandou (WCS) to continue development of the Simandou iron-ore deposit. The agreement includes a $US 15bn investment, which includes the construction of a 670km railway from Beyla to Forécariah and a deep-water port at Moribayah, Forécariah.

The Simandou deposit, which contains more than 2 billion tonnes of high-grade ore, was discovered more than 20 years ago, but has remained undeveloped due to legal disputes and the cost of building infrastructure to process and transport the ore.

Under the new agreement, the line is expected to be completed by December 2024, while commercial production at the mines is due to begin by March 31 2025.

Reuters reports that Guinea’s ruling junta ordered the cessation of all activities at the massive deposit at the start of March, saying there had been no progress made on developing the project.

China Railway 18th Bureau Group began building the railway line in 2021 under contract from WCS, but the government has pushed for closer collaboration between WCS and Rio Tinto to ensure the project is completed. The line, which skirts around the border with Sierra Leone, takes a much longer route from the ore deposit to the coast than the more direct route through neighbouring Liberia.

Guinea News reported on March 27 that the new agreements will run for 35 years. The minister of mines and geology, Mr Moussa Magassouba, said that under the reworked agreement, the government would gain a 15% share in both the rail and port projects.

“In the initial basic agreements, it was said that the companies could use the infrastructure for up 30 years before returning it to Guinea,” he says. “We have managed to agree that this infrastructure will become the property of the state as soon as it is built. We are going to create a national agency to manage the railway and port structure. We have agreed that the infrastructure that will be built, the rail line in particular, will not only be for ore - but it will also be a multi-purpose infrastructure for ore, for miners, for agricultural products, for passengers and their goods. This was one of the strictest conditions that the Guinean state set.

“We have also insisted that any other mining company that sets up in this corridor, in the south-eastern part of Guinea, will have access to this line in accordance with the capacity of the railway infrastructure. We also insisted on local content. We said that from now on, for the execution of all the contracts of this project, there must absolutely be a Guinean element. We then asked for the training of Guineans. Every company that comes to set up in Guinea now has an obligation to train and transfer knowledge, and this is non-negotiable.”

Rio Tinto owns a 45.05% stake blocks 3 and 4 of the deposit, with Aluminium Corp of China (Chinalco) holding 39.95% and Guinea’s government the remaining 15%. According to Reuters, the SMB-Winning consortium won a government tender in November 2019 for blocks 1 and 2. It is developing the northern half of the mine and associated infrastructure through WCS and has said it aims to start producing iron ore in 2025 and start shipping by end-2026. Analysts have said this timeline is ambitious.

“Following a long day of consultations and negotiations, we have signed a fundamental framework agreement with Rio Tinto Simfer and the Guinean state for the development of Simandou,” says SMB-Winning founder, Mr Fadi Wazni. “This framework agreement will allow the joint development of this project, a gigantic project. The effort of all will allow an acceleration of the process and a resumption of work in better conditions so that this project reaches maturity and can bring more development and wealth to Guinea.”

“We think that co-development is a very good model for the development of a project, partly because of the large funds, the large capital that is brought together to combine the expertise of everyone,” says Rio Tinto Simfer managing director, Mr Géraud Moussarie.