The 259km line along the French Riviera will be upgraded and fitted with ETCS Level 3 under a €600m scheme, with an initial €100m allocated by the French state. 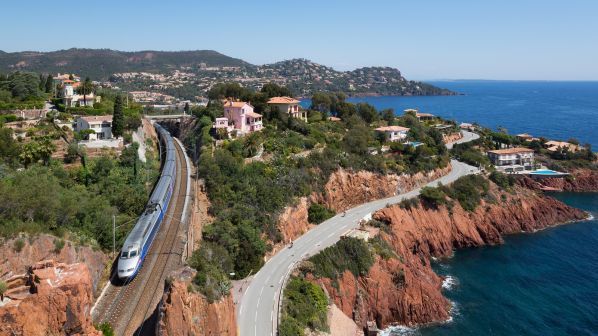 The installation of ERTMS on the Marseille - Ventimiglia main line will increase capacity on this congested route.

FRENCH transport minister, Mr Jean-Baptiste Djebbari, has signed the financing protocol for the Marseille - Ventimiglia High Performance Rail Network (HPMV), announcing an exceptional investment of €100m by central government as part of the France 2030 project and the Digitalisation and Decarbonisation of Mobility strategy.

The investment will enable the launch of the first phase of the project later this year. The project represents a total investment for French National Railways (SNCF) and the state of more than €600m by 2030, to which the European Union is expected to contribute. The HPMV project aims to make this partially saturated route the French demonstrator for digitalisation of the rail network.

The 259km line between Marseille, Nice and Ventimiglia serves four million people in three coastal metropolitan areas, which are among the 15 largest in France. On average, more than 250 commercial trains and 100 other movements run on the line and its branches every day. Between Aubagne and Toulon, and between Cannes and Menton, the line is at capacity and reliability is lower than the regional and national averages; 79% of the minutes lost on the line in 2019 were caused by signalling incidents.

The modernisation will consist of installing ERTMS to replace lineside signals and the 31 mechanical signalboxes dating from the 1960s. Control of the network will be centralised in Marseille. The first section between Théoule-sur-Mer and Ventimiglia will be operational by the end of 2027 and the rest of the line by 2030.

This project will allow a full-scale test of ETCS Level 3. The Grasse - Cannes - Ventimiglia section will be used for experiments and demonstrations of technologies developed by French manufacturers, such as very high-precision location by satellite and train automation to assist drivers.