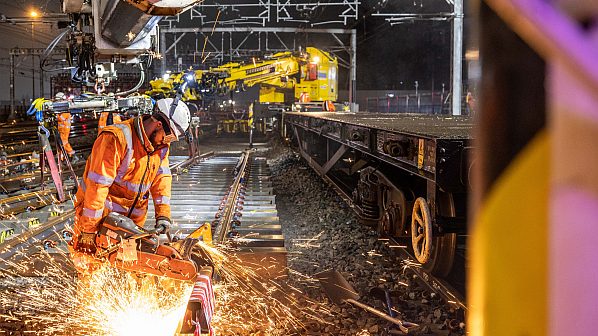 The biggest upgrade at Leeds station in 20 years has been completed.
Photo Credit: Network Rail.

More than 1500m of overhead line electrification was installed between December 25 and January 3, while junctions were remodelled, more than 200m of track renewed, and a platform extended as part of the scheme. NR had previously constructed a new station concourse and platform at Leeds station.

The British government claimed the project will help with the upgrade of railways in the region as part of the £96bn Integrated Rail Plan (IRP) published last November, which includes electrification of the Leeds - York line and the Calder Valley line from Bradford - Leeds.

“These upgrades are a first step towards beginning to address our capacity issues at Leeds station,” says Mr James Lewis, leader of Leeds City Council. “We will work with the government to secure a robust strategy for ongoing enhancements to improve connectivity for Leeds that will benefit Yorkshire, the North and Britain.”

Across the Pennines in Manchester, track and signalling was upgraded near Victoria station, as well as the installation of overhead wires, as part of the Transpennine Route Upgrade, which is now also part of the IRP.