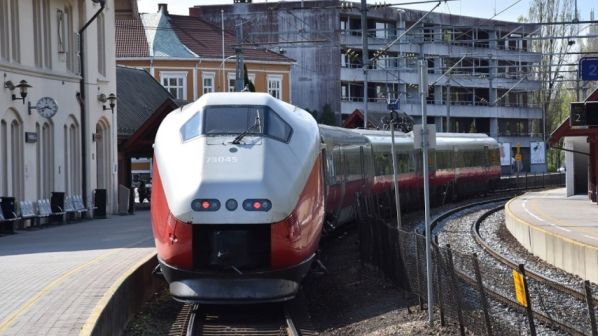 A Norwegian class 73 B series regional train at Fredrikstad station on the Østfold Line between Oslo and Gothenburg.
Photo Credit: Norwegian Railways Directorate

NORWAY’S Ministry of Transport has commissioned the country’s Railways Directorate to carry out a feasibility study into how the train service between Oslo and Gothenburg in Sweden can be improved.

The study will also address transport needs of the Østfold (Eastern) Line, development of which the ministry says has fallen behind other routes while operating costs have increased significantly.

The feasibility study will be carried out in collaboration with the Swedish Transport Administration, Trafikverket, and will aim to identify measures to provide a better rail service for passengers and freight between the Norwegian capital and the Swedish major Kattegat channel seaport of Gothenburg.

The study will consider how improvements will help to combat climate change and the degree of competition with other forms of transport.

As part of the study, the Norwegian Ministry of Transport also wants a step-by-step outline of how the Eastern Line can be improved and requires projections of future levels of passenger and freight traffic, and impact studies regarding the likely effects of the improved rail service on the wider area.

Improvements to rail services linking Sweden with Norway are also on the Swedish operator SJ’s radar as it prepares to increase the frequency of its Stockholm – Oslo service to five trains in each direction on weekdays from December 11. It will operate three trains on Saturdays and four on Sundays.

SJ cites the completion of infrastructure improvements on the Norwegian side of the border for the increase in frequency and says that more than half of these departures will Express Trains capable of running at up to 250km/h and offering passengers a choice of second class, second class “Calm” and first class accommodation.

On Express Trains the journey between the two capital cities will take just over five hours, says business manager at SJ, Mr Martin Drakenberg. These services will be operated with X2000 tilting trains, and run via Örebro, Karflstad and Arvika in Sweden and Kongsvinger in Norway.

SJ says that while rail service between the capitals will be maintained in summer 2023, planned track work between Laxå and Kristinehamn in Sweden will mean that international services will be rerouted with longer journey times as a result. Further details will be released next spring.

Drakenberg said that the summer 2023 programme would be the last major track work to be carried out on the Stockholm - Oslo route. He said SJ was “very happy we can now invest long-term in this both important and popular line.”