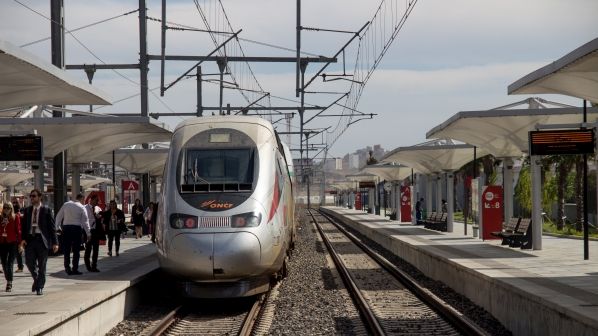 An ONCF high-speed train on the existing Al Boraq line.

MOROCCAN National Railways (ONCF) has completed a feasibility study into a new high-speed railway to link Rabat, the country’s capital on the Atlantic coast, with city of Fez, 200km to the east.

The study has covered the first phase of the project, which involves building a 150km line from the capital to Meknes. ONCF now plans to conduct a social and environmental impact study into the project.

The so-called Maghreb Line will create the newest link in Morocco’s ambitious high-speed rail programme, which will see TGV trains running between the country’s major cities. In the longer term it is proposed that the Maghreb Line will eventually reach Oujda on the Morocco-Algerian border.

Morocco’s first high-speed line, dubbed Al Boraq — a reference to a heavenly creature that is said to have carried Islamic prophets — runs between Tangier and Casablanca. This 323km line, inaugurated by King Mohammed VI in 2018, has cut travel times between the two cities from nearly five to just over two hours.

The Al Boraq currently operates in two sections - a 186km-long dedicated high-speed line between Tangier and Kenitra, where trains travel at speeds of up to 320km/h, and a 160km conventional mainline section between Kenitra and Casablanca on which trains travel at 160km/h. Services are operated by 12 Alstom Euroduplex double-deck trains, each able to carry 533 passengers. The high-speed line is electrified at 25kV ac while the Kenitra - Casablanca section remains at 3kV dc. The line carried 2.4 million passengers in 2021 compared with 1.3 million in 2020.

The next phase of the Al Boraq route involves a proposed line from Casablanca to Marrakech and the Atlantic port city of Agadir, with costs estimated at $US 7bn.

Once complete, the whole proposed high-speed rail network will link 43 cities, 14 ports and 12 airports, boosting rail’s share of the public transport market from 51% to 87%, ONCF says. Tenders have yet to be issued for the new line, however.