The final route will be finalised once the planning approval process concludes. 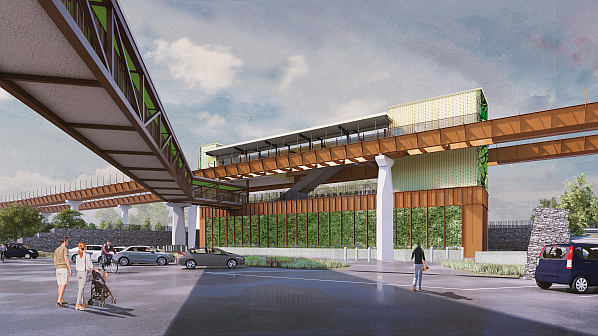 The final route for the APM will be decided once planning approval has been granted.
Photo Credit: HS2 Ltd.

HS2 Ltd has submitted new plans to Solihull Council for an automated people mover (APM) that will operate between the HS2 Interchange station, the National Exhibition Centre, Birmingham International station and Birmingham Airport.

Since the original plans were submitted in August 2020, HS2 Ltd has worked with local authorities to modify the plans, including creating an option to modify the alignment of the APM as part of a renovation of Birmingham International station which would create a new, integrated multi-modal transport exchange.

The APM, which will be built on a viaduct, will be able to carry 2100 passengers per hour in each direction on a six-minute journey on the 2.3km line.

Once the proposal has passed through the planning process, a decision over the preferred alignment will then be taken at a later date by HS2, the Urban Growth Company (UGC) in Solihull and the contractor appointed to construct the APM..

For data on British rail projects, subscribe to IRJ Pro.