The three-section milling train is emissions-free and has a very small profile for operation in metro tunnels. 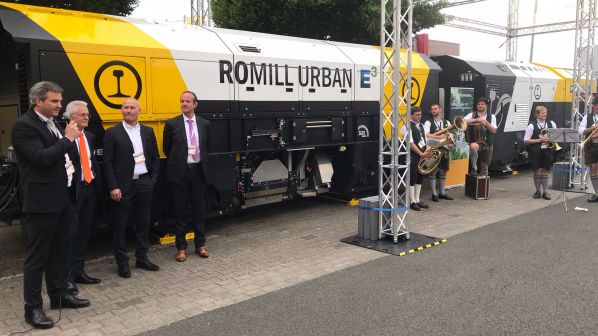 IRJ at the IAF track show in Münster: Robel, Germany, handed over its first Romill Urban rail milling train to Plasser American on May 31. The train will now be shipped to Florida where it is due to arrive in August for operation on North American metro networks.

The three-car train has been developed jointly with Schweerbau International, which designed the patented climb milling process and polishing systems, and Vogel & Plötscher, which supplied the measuring equipment.

The train is designed to correct the rail profile and remove defects. The milling system comprises a 600mm milling head with 14 cassettes each of which can hold 18 tungsten carbide milling tools to achieve a very accurate rail profile. The orientation of the heads can be changed on the rail crown.

The rail grinding system which polishes the rails after milling is spark-free.

The train has a transverse laser system to measure the profile across the rail head and a longitudinal and transverse measuring system to check the quality of the milling and the finished rail profile. There is also an integrated eddy current detection probe to check for defects in the rail down to 2mm.

The train has a 400kW diesel engine and generator which can charge the three lithium-ion batteries up to 90% in around 90 minutes. There is also a shore charging facility which takes 15 hours to reach a 90% charge. Each battery can provide about 1 hour of travel and 1 hour of work.

The train can be operated by two people: a driver and an operative to monitor the milling process.

Robel has also built a main line version of the train, and the first three trains are being supplied to Japan.