75% of work in hand to provide 1435mm gauge from French border to Algeciras. 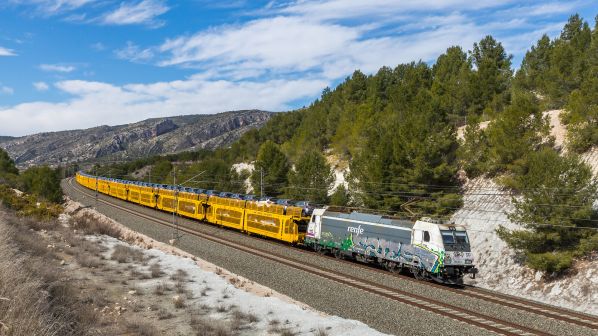 THE Spanish Ministry of Transport, Mobility and the Urban Agenda (Mitma) reports that 75% of construction work is now in progress on the Mediterranean Corridor programme, with 100% of design studies completed.

The Mediterranean Corridor will provide a 1435mm-gauge route along the length of Spain’s east coast from the French border to Algeciras in the far south, through a combination of laying a third running rail on existing 1668mm-gauge routes, gauge conversion and the construction of high-speed lines.

Mitma has provided €4.4bn for 300 separate projects that form part of the Mediterranean Corridor programme, which it says is now moving ahead “at cruising speed.”

In the first nine months of this year, tenders were called for contracts worth a total of €1.5bn, with €900m of contracts awarded and work completed on projects with a combined value of over €450m.

According to the government’s Mediterranean Corridor commissioner, Mr Josep V Boira, the programme has made substantial progress since the present administration came to power in June 2018.

Since then over 300 contracts have been put out to tender, equivalent to more than one a week which is a quantity without precedent on the Spanish rail network.

A total of 233km of new infrastructure has been brought into service since June 2018, taking the length of the Mediterranean Corridor completed so far to 624km.

When completed, the Mediterranean Corridor will provide a 1435mm gauge freight route that is expected to cut CO2 emissions by up to 5.5 million tonnes a year.

The next phase to be completed will be the 45km section from Xàtiva in the Valencia region to La Encina, where infrastructure manager Adif is now undertaking commissioning trials.

The existing 1668mm-gauge route is being converted to 1435mm-gauge double track and 25kV ac electrification.

“In just over four years in government we have increased the length of the Mediterranean Corridor by 233km,” says Mitma secretary of state, Ms Isabel Pardo de Vera.

“The Mediterranean Corridor is a priority corridor for Europe for which there is a perfectly pre-established plan. A plan that we are sticking to. A plan that we are going to fulfil and that we will continue to complement with other initiatives not related to infrastructure, such as incentives for the purchase of rolling stock or eco-incentives.”