New station to be built for Prague exhibition centre. 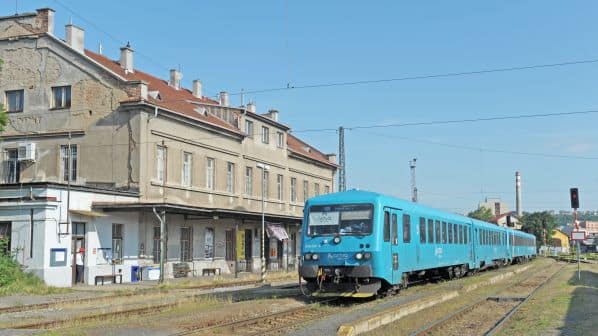 An Arriva Vlaky service calls at Praha Bubny station which is to be rebuilt.
Photo Credit: Quintus Vosman

CZECH infrastructure manager SŽ has signed a contract worth Koruna 3.8bn ($US 166.7m) with a consortium of Metrostav TBR, OHLA ŽS and Elektrizace železnik Praha to upgrade the section of the Prague - Kladno route between Prague Bubny station and a new station serving the exhibition centre at Prague Výstavištĕ.

The Prague - Kladno route is one of the busiest non-electrified lines in the Czech Republic. SŽ is currently undertaking an upgrade programme that includes track doubling and the construction of a new branch to take passenger trains to Prague Václav Havel Airport.

The contract includes doubling 1.3km, building the new exhibition centre station at Prague Výstaviště and rebuilding Prague Bubny on a more convenient site, closer to the Negrelli viaduct across the Vltava river.

The new station will be larger than its predecessor, with three platforms and four platform tracks. It will become a major public transport hub providing easy interchange between rail, metro and light rail services, and has been designed by Jakub Cigler Architekti.

Work on the Prague - Kladno upgrade has been divided into several sub-sections. Earlier this year work started between Kladno and Kladno Ostrovec, while SŽ is preparing to start tendering in 2023 for upgrade work between Prague Ruzyně and Kladno and the refurbishment of Prague Masarykovo nádraží station.

“By signing the contract, we are starting modernisation of the second section of the future fast, modern and reliable railway line between Prague and Kladno this year,” says SŽ CEO, Mr Jiří Svoboda.

“In the case of the section between Praha Bubny and the new station at Praha Výstaviště, it is not just about the reconstruction of the line, but the beginning of the transformation of the entire Holešovice district. The new Bubny station will be a connecting element for the area divided by the railway.”