The three tunnel boring machines are set to begin work next year. 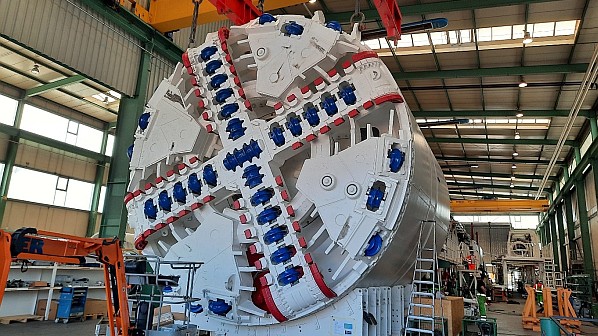 One of the TBMs prior to being dispatched to Canada.
Photo Credit: West End Connectors/Metrolinx

THREE tunnel boring machines (TBMs) that will be used to excavate tunnels for the $C 5.5bn ($US 4.25bn) Scarborough Subway Extension and the $C 3.76bn Eglinton Crosstown West Extension in Toronto have been delivered to Oshawa and Hamilton ports from Germany, where they were manufactured by Schwanau.

The TBMs are expected to arrive at their respective sites in January before beginning work in April or May.

The TBM for the Scarborough Subway Extension will excavate a 7.8km tunnel for the metro scheme, while the two TBMs for the Eglinton Crosstown project will dig 6.5km tunnels between Renforth Drive and Scarlett Road for the LRT scheme.

Welcoming the arrival of the TBMs, Metrolinx president and CEO, Mr Phil Verster, says that the two 0 will not only benefit the communities they will serve, but the region as a whole.

A feature with on expansion in greater Toronto, including insight from Verster, will be published in the January edition of IRJ.

For data on light rail projects in North America, subscribe to IRJ Pro.