The line will connect all major suburban lines radiating from Melbourne. 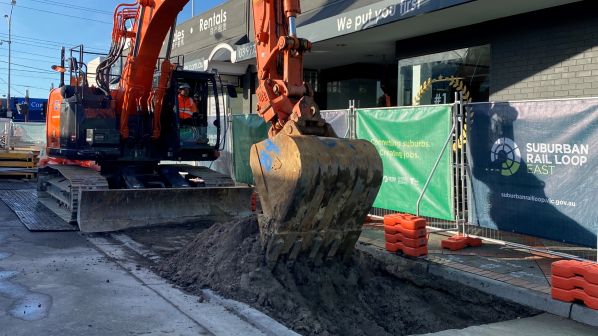 CONSTRUCTION has begun on Melbourne’s 90km, $A 50bn ($US 35.62bn) Suburban Rail Loop (SRL), an orbital line that will connect all major suburban lines and avoid the need for passengers to change trains in the city centre.

The Victorian State premier, Mr Daniel Andrews, and Suburban Rail Loop minister, Ms Jacinta Allan, visited the suburb of Clayton to mark the start of construction of the 26km SRL East between Cheltenham and Box Hill. The laying of a new 630m-long sewer pipe through a tunnel dug by a remote-controlled micro-tunnelling machine marked the beginning of the programme of initial works.

The first phase for SRL East will also include road modifications, service relocation and preparation of three sites where the tunnel boring machines (TBMs) will be launched.

SRL East will deliver 26km of twin-bore tunnels from Cheltenham to Box Hill with new underground stations at Cheltenham, Monash University Clayton Campus, Glen Waverley, Burwood and Box Hill. Tunnelling is scheduled to start in 2026 with up to 10 TBMs being deployed.

Expressions of Interest (EOIs) have now closed for the two tunnelling contracts. The first is between Cheltenham and Glen Waverley, the longest tunnelling package in Victoria’s history, while the second is between Glen Waverley and Box Hill.

The five bidders are:

The Melbourne Suburban Rail Loop was featured as one of IRJ’s 20 projects to watch in 2022.