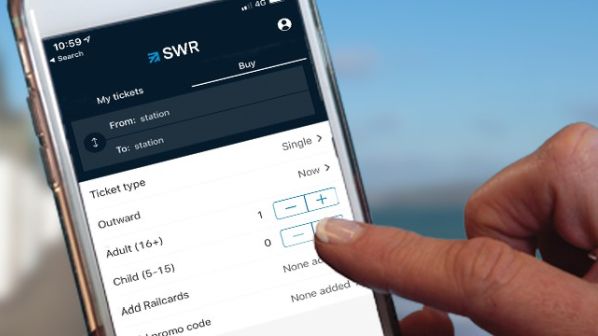 BRITISH passenger operator South Western Railway (SWR) is undertaking a trial of new technology which enables people with sight loss to navigate their way around railway stations with great ease.

The company is trialling the myEyes app, which uses Near Field Technology – the same as allows contactless payment to be made by mobile phone – to provide audio directions which guide passengers from a station entrance to SWR Assisted Boarding Points on platforms. At those points the passenger can get help to board their train with a little as 10 minutes’ notice.

Upon entering the station, the passenger activates the myEyes app, with Bluetooth beacons installed across the station used to track the device they are using. By identifying exactly where the customer is in the station, the app passes them from beacon to beacon, offering audio instructions of the direction in which stairs and lifts are located along with other useful information such as where the station ticket office is.

The trial started on August 1 and will run for three months at the London suburban stations of Vauxhall and Putney before potentially being rolled out at other station across the SWR network.

The technology was brought to SWR’s attention by the member of parliament for the London constituency of Battersea, Ms Marsha de Cordova, who is herself visually impaired.

“I know this app could transform travelling for blind and partially sighted people, as ultimately, travelling and navigating around the city is probably one of the biggest challenges that we face,” de Cordova says.

“Unfortunately, it is the case that many people still feel that the railway is too difficult to negotiate with a disability – whether visible or invisible,” says Mr Mike Adlington, SWR’s accessibility manager. “At SWR, we’re absolutely determined to change this and make rail travel more accessible for all.”

The initiative is being supported by the Royal National Institute of Blind People (RNIB), a leading British sight loss charity, and the myEyes technology has been installed by Self Energy as the second project of their Sustainability Development Goals programme to assist inclusion and accessibility.

You can watch a volunteer from the RNIB testing the app at https://youtu.be/Tun4CgxJdwk