Beacon Rail has ordered 15 battery locomotives for Britain on a speculative basis. 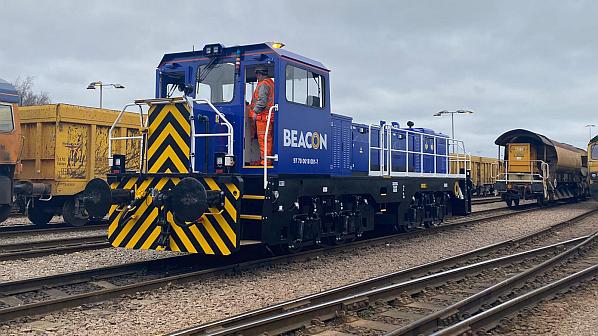 GB Railfreight (GBRf) has taken delivery of a class 18 hybrid+ CBD90 shunting locomotive as part of a three-month trial with Beacon Rail Leasing.

Clayton is building 15 of the 90-tonne, 20km/h 416kW Bo-Bo locomotives at its Burton factory in Britain on a speculative basis for the rolling stock leasing company. The order was placed in May 2020.

GBRf is the first main operator to trial a class 18, with the first unit arriving at March Whitemoor Yard for evaluation. A second is due to move to the Port of Felixstowe for trials.

The class 18 is a modular design equipped with 282 lead-acid battery cells, housed in separate modules, which provide traction. There is also a small JCB Ecomax Stage V diesel engine fitted to the locomotive, but this acts purely as a generator to assist with battery charging rather than to provide power. The batteries are charged via regenerative braking and the locomotive can be charged from a shore supply when not in use. The life expectancy of the batteries is seven to eight years.

The locomotives are designed to replace the class 08 and class 09 shunting locomotives used by several operators, which date from the late-1950s onwards.