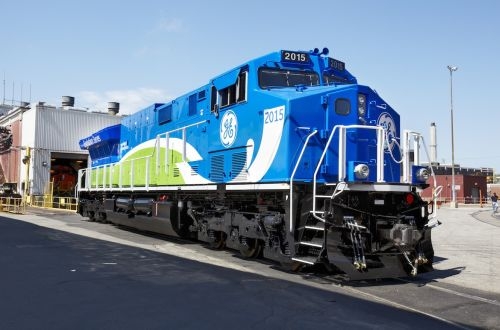 The Evolution Series Advance Power 4 locomotive meets the US Environmental Protection Agency (EPA) Tier 4 emissions standards without the use of any after-treatment. GE says the unit will decrease emissions by more than 70% and could save railways as much as $US 1.5bn in infrastructure and operating costs. Tests of a Tier 4-compliant locomotive have taken place on 160km of track in western Pennsylvania and eastern Ohio, and GE says additional tests will take place soon.

In addition to a cleaner diesel locomotive, GE is also showcasing its NextFuel natural gas retrofit technology which enables existing Evolution Series locomotives to operate using both diesel and liquid natural gas (LNG). NextFuel allows up to 80% natural gas substitution as well as 100% diesel use and GE has been testing the technology since the spring. The LNG is cryogenically stored in a tender and enables trains to travel further without refuelling. The technology meets US EPA Tier 3 emissions standards and GE says a pilot programme with BNSF will commence in 2014.