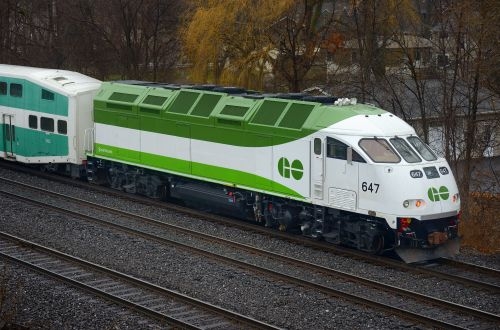 In 2013 Go Transit sent a locomotive from its existing MPI fleet to the company's plant at Boise, Idaho, to be repowered, replacing the existing EMD-710 power unit with two Cummins QSK60 engines with a combined rating of 4MW.

As a result of the dual-engine design, heavy modifications to the body have been made to accommodate extra air intake and exhaust ports.

According to MPI, the dual-engine configuration will improve reliability and reduce fuel consumption as the second engine can be disabled as needed or is used as a backup should one fail.

The locomotives are equipped with an IGBT-based ac traction system with individual axle control, brushless ac motors and a synchronous alternator. Over the weekend of December 12 and 13, Go Transit performed testing with the new locomotive, including station timing, acceleration and braking distance testing at speeds of up to 150km/h.

The test train was formed of 14 coaches to simulate a fully-loaded 12-car train.