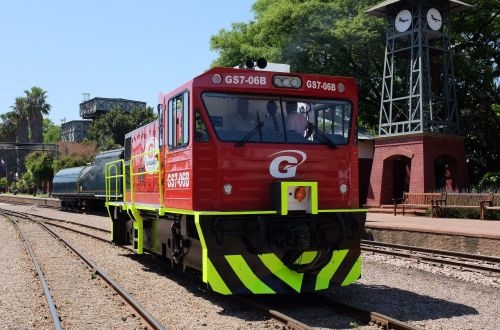 The RS7S3C is a three-or two-axle genset locomotive with a 522kW Caterpillar engine but capable, say its builders, of a 150kN continuous tractive effort, and 200kN starting tractive effort.

This haulage capability is largely due to its heavy fabricated steel frame which gives the three-axle version a 20 tonne axle load. The total locomotive weight is 60 tonnes and features include a digital control system, slow speed loading and the comfort of an air-conditioned driver's cab.

Grindrod officials hope the $US 750,000 locomotives will find work at local gold and platinum mines where operators rely on a motley fleet of ex-Transnet mainline diesels and a handful of new-build locomotives to haul ore from mines to processing plants.

Two units are currently on test at a gold mine in South Africa's Free State province.

Grindrod, a relatively new player in South Africa's rail industry, builds locomotives at its plant in Pretoria. The company recently completed its 88th mainline locomotive and the fleet is now working on railways across Africa.