NEW Zealand’s state-owned operator KiwiRail has been given a $NZ 35m ($US 22.8m) cash injection to refurbish its fleet of 30 year-old EF class electric locomotives over the next four years, revising a decision by the KiwiRail board in 2016 to decommission the fleet in March 2019. 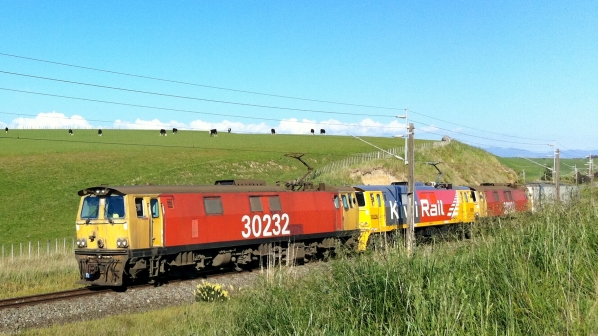 Deputy prime minister and minister of state-owned enterprises, Mr Winston Peters, says refurbishing the locomotives rather than replacing them with modern diesel locomotives was the right decision long-term.

The refurbishment will include upgrades of the electronic control systems and will extend the life of the locomotives by about 10 years. Just eight of the electric locomotives are currently in service, and the EFs have been failing every 30,000km on average, well below KiwiRail’s fleet target of 50,000km. A total of 22 of the 3MW locomotives were purchased from Brush Traction, Britain, and entered service between 1986 and 1988.

At $NZ 35m, the refurbishment programme will cost almost three-times the amount touted by unions and other groups who had argued against mothballing the electrification of the North Island Main Trunk line between Palmerston North and Hamilton. KiwiRail had planned to keep and maintain the catenary in order to reverse the original decision if needed.

Explaining the reversal, KiwiRail’s acting chief executive, Mr Todd Moyle, says the 2016 decision had not been taken lightly and reflected on the funding available to the company at the time. KiwiRail had also argued that using modern diesels as part of a more efficient rail freight service would have had a greater effect on reducing emissions by taking more trucks off the country’s roads.

However, Moyle says the new coalition government has shown a clear commitment to rail, including NZ Transport Agency providing funding to undertake business cases for further electrification of the Auckland rail network from Papakura to Pukekohe, and adding a third main line in Auckland.

Moyle adds that KiwiRail has been in discussions with the government about the possibility of further electrification and is also exploring the use of other fuel sources. Electrification of transport and industry are considered key to meeting the country’s 2050 emission targets. Rail is also an area where lower-emission fuels, including natural gas, liquefied natural gas and hydrogen are being trialled internationally.

Electrifying the rest of the route between Auckland and Wellington, another option previously favoured by parties now in government, was estimated to cost more than a $NZ 1bn and would have still required the use of diesel units throughout the rest of the North Island.