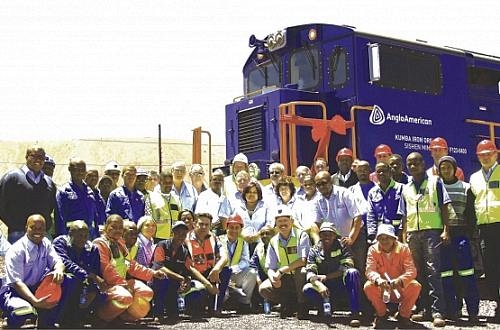 The new 1067mm-gauge locomotives will replace 10 life-expired units, which are hired from Transnet and used in pairs for loading operations. A single C30ACi will be used to load a train of 114 wagons, which until now required two locomotives.

The Co-Co locomotives are a development of the class 43 for Transnet Freight Rail, 143 of which are being supplied by GE and Transnet Rail Engineering.

Mr Tim Schweiker, president and CEO of General Electric South Africa, handed the key for the first locomotive to Kumba Iron Ore CEO, Mr Norman Mbazima, saying: "General Electric is grateful for the opportunity to have Sishen mine as a customer. We are impressed by the magnitude of the operations and that this mine again put their trust in GE to provide the locomotives."

Accepting the delivery of the locomotives, Mbazima said: "Kumba Iron Ore showed extremely rapid growth in the past five years. We can only sustain this growth by using equipment that not only meets this growth but allows us to focus on safe production at Sishen mine."