NETHERLANDS Railways (NS) has exercised an option with Bombardier for 18 additional class 186 Traxx multi-system locomotives, which will be used to operate 160km/h passenger services from Amsterdam to Rotterdam and The Hague via the HSL South high-speed line. 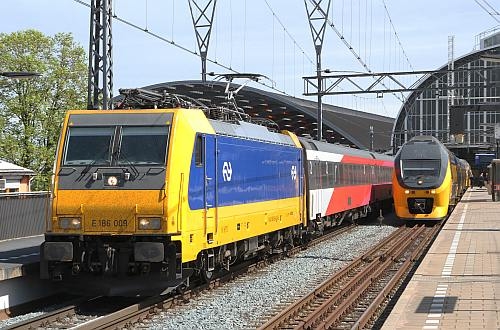 NS placed an initial order for 19 class 186s in December 2013 without tendering due to the urgent need to replace the ill-fated AnsaldoBreda V250 trains. Deliveries began in September 2014 and the locomotives were used to supplement the existing leased fleet of Class 186s used on Intercity Direct services from Amsterdam to Rotterdam and Breda.

The total cost of the follow-on order has not been disclosed by NS. Deliveries will begin next May and the locomotives will be equipped with ETCS Level 2 for operation on HSL South.

NS had planned to operate a more intensive inter-city service via the high-speed line from December 2016 with the locomotives operating in push-pull mode with modified type ICRm driving trailers. However, tests undertaken in 2014 and 2015 revealed major technical difficulties with this plan and conventional locomotive haulage is planned with a locomotive at each end of the train.

As with the first batch, the locomotives will be assembled at Bombardier's facility in Kassel, Germany, using bodyshells manufactured at the company's plants in Poland