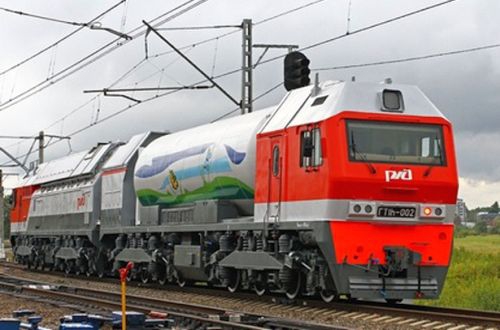 Under the tests, which were used to determine locations for gas fuelling points, the 8.3MW double-unit locomotive hauled a 7000-tonne train over the entire length of the 636km route without refuelling. This was followed by a test a few days later on the Surgut - Limbey section which demonstrated that the locomotive could haul a 9000-tonne train over the 532km section without a fuel stop.

RZD says that three fuelling stations will be needed to support regular gas-turbine operation over the length of the route. At present the only such facility is located near Yekaterinburg.

The 100km/h GT1h-002 was built by Sinara at its Lyudinovsky Diesel Locomotive Plant, and is a development of the GT1h-001 prototype outshopped from Voronezh locomotive works in 2007.

In February RZD signed an agreement with Gazprom, Sinara Group and Transmashholding to cooperate on the development of LNG traction and fuelling infrastructure with the aim of developing locomotives to haul 9000-tonne freight trains on non-electrified sections of the Sverdlovsk Railway.

Between 2020 and 2022 RZD plans to begin commercial operation of 9000-tonne trains hauled by gas turbine locomotives on the 222km Voinovka - Tobolsk section, and introduce gas turbine shunters at yards in Egorshino, Voinovka and Tobolsk.