FRENCH National Railways (SNCF) has completed the first test run of its autonomous train programme, with a locomotive hauling a flatbed wagon and a carriage travelling 4km between Villeneuve-Saint-Georges and Juvisy, Paris. 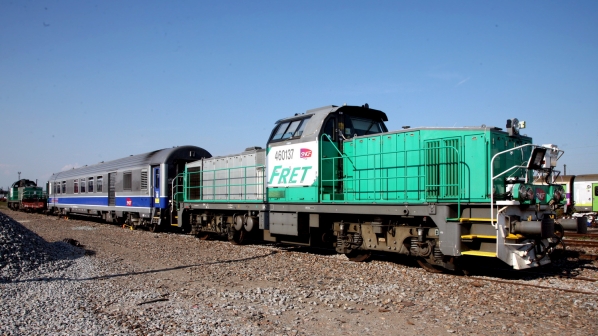 The test train was driven remotely from a control centre established at Vigneux-sur-Seine, and follows 18 months of research and development.

The run tested satellite transmission and the use of a private cellular LTE network equivalent to 4G. Cameras fitted on the locomotive provided real-time images for the driver in the control centre, who accelerated and braked the train.

“This is a first for the railroad system,” says Mr Luc Laroche, director of the Train Automation project at SNCF. “This successful experiment is a fundamental step in the realisation of the train of tomorrow: a more regular and more punctual train, which welcomes more people and carries more goods. For a group that operates 17,000 trains and carries 4 million passengers a day, this is a major issue.”

SNCF announced in September 2018 that it is partnering with French state-owned research institute Railenium alongside Alstom, Altran, Ansaldo STS and Apsys on the freight element of the autonomous trains project, which involves equipping an Alstom locomotive for Grade of Automation (GoA) 4 operation.

The test was a key step in the project and will allow further tests to be undertaken focusing on developing the techniques and equipment in preparation for commercial applications and to combine the deployment of satellite communications and 4G technologies.

The project has also succeeded in automating the recognition of signals, and will move forward with the automation of obstacle detection in the coming months.

SNCF has agreements with two consortia to develop and integrate autonomous passenger and freight train prototypes for main line infrastructure at GoA 4 by 2022.