TATA Steel has introduced the first of three rebuilt GE diesel locomotives for shunting at its Beverwijk steelworks in the Netherlands. 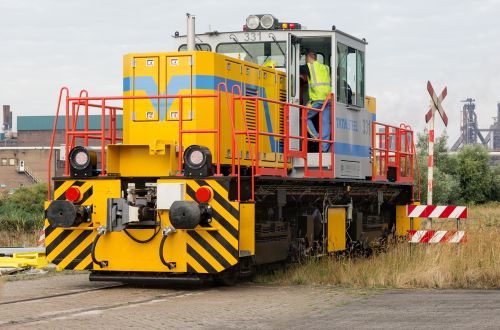 The locomotives, which were originally built in the late 1960s and early 1970s, are being modernised with the aim of improving the sustainability of internal rail transport at Beverwijk, where 14 of the locomotives are employed.

The project is the result of close cooperation between Tata Steel and Dutch company Bemo Rail. Tata was responsible for all work below the frame, including the refurbishment of wheelsets and the braking system. Everything above the frame has been removed and replaced with a new motor compartment and driver’s cab. The original GE prime move has been replaced with two 241kW John Deere diesel engines and a modern locomotive management system.

The modular nature of the redesigned locomotive eases the exchange of components, reducing maintenance costs.

NOx emissions are reduced by at least 96% and particulate emissions by 95%, while fuel consumption is forecast to fall by 22% while maintaining the same power output as the original engine, albeit with the addition of AdBlue diesel exhaust fluid.

The second locomotive is due to be delivered in October and the third will arrive in December. Tata expects to finalise plans soon for the modernisation of the 100km internal rail network at Beverwijk, which carries around 25 million tonnes of steel a year.