Construction progresses on Berlin U5 extension

CONSTRUCTION is nearing completion on the 2.2km extension of U-Bahn Line U5 from Alexanderplatz to Brandenburg Gate in Berlin. 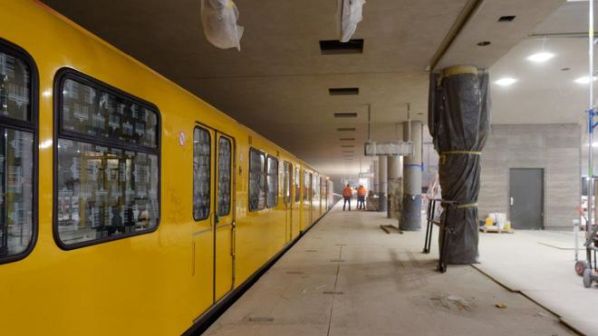 The first train to use the line was an empty U-Bahn train hauled by a BVG diesel locomotive on March 10.
Photo Credit: BVG

The €525m section is due to open in late 2020 with two new intermediate stations at Rotes Rathaus and Unter den Linden. Trains will also serve Museuminsel, which is less complete, from mid-2021.

The original Line U5 opened in stages between Hönow and Alexanderplatz between 1930 and 1989. Former reversing sidings just west of Alexanderplatz station have been utilised for the western section of the extension. While new tunnels were not required, substantial work is underway to strip around 7000 tonnes of concrete and asphalt layers from the ground above the tunnel structures dating from the beginning of the line’s construction in 1926-27. The project’s engineers decided this was necessary in 2017 as the previous assumed overburden mass was proven to be under-estimated during survey work.

Work on the tunnel roof began in late 2019 and continues despite the restrictions imposed by the coronavirus pandemic. The spoil is removed by road and the roof is being covered with a lightweight but strong and sound-absorbent aggregate usually made from recycled glass.

The work to remove the old and install the new covering will move westward during April and May and is set to be completed by November. The surface route above the extension of Line U5 is designed to accommodate the planned new Alexanderplatz - Potsdamerplatz tram line, construction of which is due to start in 2025.