THE first of 31 six-car driverless EMUs being supplied by PT Inka, Indonesia, for the Jabodebek metro project has arrived in the Indonesian capital Jakarta. 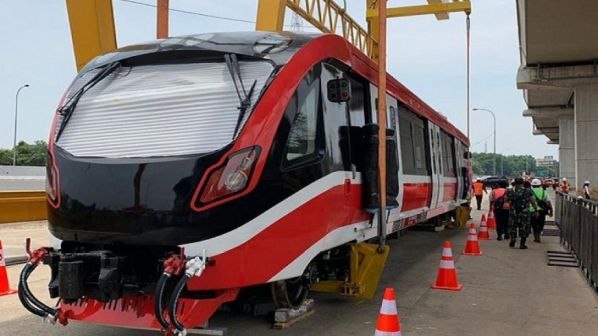 As the trains are designed to operate at Grade of Automation 3 (GoA3), cabs are provided at each end so that operation of the train can be monitored by a crew member. Each train has room for around 1500 passengers

The construction of the main depot at East Bekasi has been delayed due to land acquisition problems, so a temporary depot has been established at the end of Harjamukti Cibubur station which can accommodate two trains.

Construction of the 44.4km Jabodebek LRT metro project was initially approved by President Joko Widodo in September 2015. Phase I will run from Dukuh Atas, where it will interchange with the metro and commuter-rail network, via Kuningan, to Cawang where it splits with one branch running east to Bekasi and the other running south to Harjamukti Cibubur.

The elevated line has standard-gauge track with third-rail electrification. It will have moving block signalling designed for headways of 2-3 minutes.