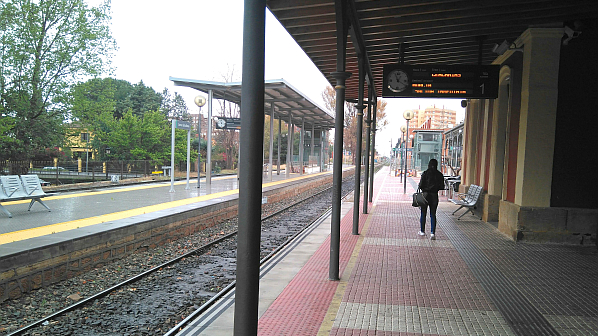 Lorca station in 2019. This line is to be upgraded into a double-track electrified railway.
Photo Credit: Shutterstock.

THE president of Spanish infrastructure manager AdifAV, Ms María Luisa Domínguez, has unveiled plans for the first direct rail connection between the Spanish cities of Murcia and Almeria.

The new €3bn line will be an electrified standard-gauge railway and is designed to help create a modern railway in this area of the Mediterranean arc.

Between Murcia, Pulpi and Aguilas the existing single-track non-electrified 1668mm-gauge railway will be rebuilt as a double-track, standard-gauge electrified line partially on a new alignment, Level crossings will also be removed. The new high-speed line will branch off the rebuilt line at Pulpi to reach Almeria.

It’s expected that demand for rail transport between Murcia and Aguilas is between 2 million and 3 million passengers annually, compared with the current 1.2 million.

The total length of the upgrade is 106.9km. This will be split into seven sections, with the Lorca - Pulpi section the longest at 31.3km. Within these seven sections there are 23 viaducts, nine tunnels (four new and five to be expanded) and 20 structures to be built.

The new railway will be funded with €446.6m via the European Recovery and Resilience Mechanism (MRR) through the NextGenerationEU facility.

Adif has also confirmed plans for a double-track, standard-gauge line from Madrid Chamartín station to the T4 terminal at Barajas Adolfo Suarez airport that will connect with the high-speed network.

Funding for the new line will also be provided by the European Union via the Next Generation EU facility. Adif has published its plans for public consultation, a process that will take 15 days.

While the specific high-speed rail connection is developed, Adif is working on plans to allow a short to medium-term access for some long-distance trains from Chamartín to the airport. This would be achieved by sharing tracks used by Madrid’s Cercanías service.

Adif has previously announced plans to significantly invest in its infrastructure including Chamartín station.