The trains will include both conventional seating and sleeper compartments. 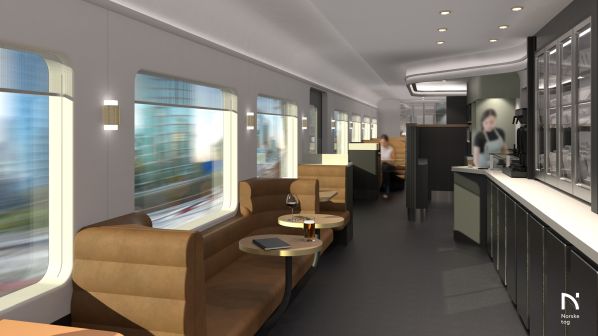 NORWEGIAN state-owned rolling stock leasing company Norske Tog has shortlisted four suppliers to bid for a contract to supply up to 100 new trains for long-distance services.

Alstom Transport Norway, CAF, Stadler and Talgo have qualified to submit bids for the framework contract to supply the class 79 trains, with an initial order for 17 sets worth an estimated NKr 6-8bn ($US 680-910m).

The aim of the tender is to procure a standardised high-capacity train with a flexible operational concept to replace a variety of different vehicle types in the existing fleet. The new trains will include sleeper compartments, which can be converted into seating compartments during the day. Norske Tog has also asked suppliers to provide options for “more affordable” sleeping accommodation, including reclining seats similar to those used in business class on airliners.

The fleet will comprise electric and bi-mode (diesel and electric) trains, the latter enabling operation on non-electrified routes such as Trondheim - Bodø. As part of the tender, manufacturers will be asked to consider how operation can be made more sustainable as traction technologies develop during the lifecycle of the train, for example by using batteries. Norske Tog has not specified whether the trains should be locomotive-hauled stock or multiple units.

The deadline for submission of tenders is April 29, with best-and-final offers due by November. Norske Tog expects to announce the winning bidder in December.

Norske Tog says production of the first trains will begin no earlier than 2024, with the first deliveries scheduled for 2025 and the fleet entering service from 2026 onwards. The introduction of the class 79s will enable the gradual withdrawal of locomotive-hauled trains formed of ageing B5 and B7 coaches.

The initial batch will include 10 electric and four bi-mode trains, all around 220m-long - the configuration of the remaining three trains in the first tranche will be confirmed when the contract is awarded.

Last month, Norske Tog awarded Alstom a NKr 4.2bn contract for 30 Coradia EMUs with an option for a further 170 trains.