OMNITRAX has reached an agreement to sell the Hudson Bay Railway to a group of Canadian companies that will repair the flood-damaged line. 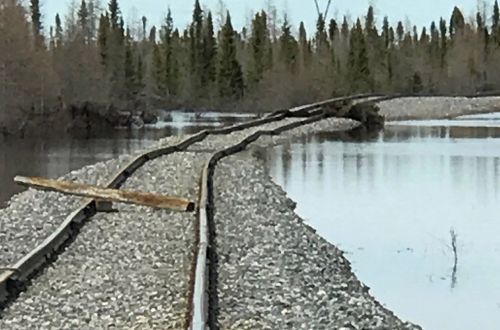 The line between Amery and Churchill has been inoperable since May 2017 and OmniTrax had initially refused to restore services, citing reconstruction costs of up to $C 60m ($US 46m). However, in late August the US company relented and began initial engineering after the Canadian Transportation Agency said it would hold OmniTrax responsible for repairs.

The line to Churchill and facilities at the port of Churchill will now be taken over by Arctic Gateway Group, which includes Toronto-based Fairfax Financial Holdings Limited, AGT Food and Ingredients, and Missinippi Rail Limited Partnership, a consortium of First Nations and northern communities which holds a 50% stake in the group.

No purchase price has been disclosed.

“Over the past eight months, we have been working diligently with our many partners to come together, develop a business plan and satisfy the principles for successful new ownership of the Hudson Bay Railway and Port of Churchill facilities,” says Mr Paul Rivett, president of Fairfax. “The Government of Canada acknowledges the value and importance of our inclusive group and is supportive of our efforts providing a long-term support package through Western Diversification and Export Development Canada to acquire the assets and implement Phase One of the project which is to repair the rail line, undertake safety and rehabilitation upgrades to the port and the railway assets to efficiently operate freight and passenger services to the Northern communities and the Port.”

Rivett says that the new owners have begun repairs by awarding a contract to Cando Rail and Paradox Access Solutions.

He added the deal establishes a foundation to build an Arctic gateway for export and import activities through Canada’s only deep-sea Arctic port.