The five-year plan includes an ambition to develop trains capable of more than 200km/h. 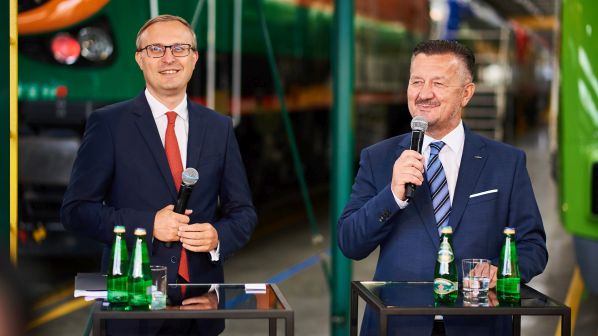 POLISH manufacturer Pesa’s new five-year 2025+ strategy includes the development of a train capable of travelling at more than 200km/h, along with a focus on increasing its light rail and locomotive capabilities.

The strategy, announced on July 21, assumes the development of new technologies and strong IT tools, cost optimisation of current products, reconstruction of the group’s business and organisational model, consolidation of support functions, and building a profitable aftersales segment. Pesa says this will help the company strengthen its position as a leader in the Polish market and support expansion into new international markets.

The strategy has 16 projects, including launching new investments, implementing innovative technologies and starting the production of new LRVs, locomotives and vehicles. This includes the new Regio160 train, which has been designed in response to the zero-emission transport needs outlined in the European Green Deal. The train adopts a modular platform, allowing the traction elements and interior to be changed to suit an operator’s requirements. This includes a standard EMU design, and battery-electric hydrogen-electric variations.

Pesa says its experience it has gained in the past, supported by cooperation with strategic partners, will guarantee stable development, foreign expansion and an improved domestic position.

“The fact that we deliver vehicles on time that our customers are satisfied with is the result of changes introduced in all areas,” says Pesa CEO, Mr Krzysztof Zdziarski. “We have improved direct relations with carriers, we have adapted vehicle designs to customer needs, we have restored good relations with suppliers and co-operators, we have started a technological breakthrough in production, focusing on robotisation and automation, and we reliably manage financial processes and settlements. All this creates a new image of Pesa.”

Pesa is also looking at other ways to harness hydrogen traction, including developing a shunting locomotive that will be presented at the Trako trade fair in September. Pesa says the experienced gained from the shunter project will be used in work on the hydrogen passenger train.

Pesa says it is planning on building on its experience with double-deck trains, and is developing a new generation of push-pull sets for inter-city and regional services. Pesa is also looking to manufacture vehicles with a maximum speed of more than 200km/h, in conjunction with external partners.

“We are establishing cooperation with other technological partners, including foreign ones, who have experience in, among others, the implementation of high-speed rail projects or the implementation of hydrogen technologies,” Zdziarski says. “This openness to cooperation and building competences for the future thanks to partnerships is one of the changes in Pesa’s approach to development. We have gained a lot of experience in the production of rail vehicles, we have a team of very good specialists, we set ourselves new goals, but we approach them with humility.”

In the coming years, the company also wants to strengthen its position as an LRV manufacturer. Pesa is planning to expand into other European markets through the development of a new LRV that will be based on a single structure with a modular interior.

The company’s portfolio will also be complemented by the Gama locomotive platform, including a hybrid electric-diesel version and a tri-system electric locomotive capable of operating under 3kV, 15kV and 25kV ac electrification at up to 200km/h.

As part of the internal restructuring under the 2025+ plan, Pesa will establish domestic and foreign maintenance and service branches, which are expected to provide a significant share of the company’s revenue.

Pesa is due to begin delivering the EMUs for Lesser Poland Railways and LRVs for Iasi, Romania, in the coming weeks.