Prague to launch tender for up to 200 LRVs

Expected total value for maximum order is $US 633m. 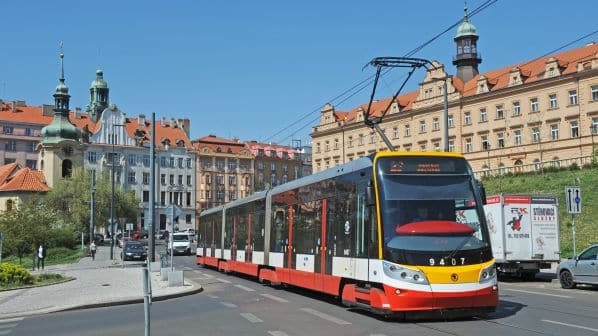 The latest additions to the Prague fleet are the low-floor 15T LRVs built by by Škoda Transportation.
Photo Credit: Quintus Vosman

PRAGUE public transport operator DPP will launch a tender to purchase up to 200 low-floor uni-directional LRVs, looking to award the contract on the basis of open negotiation.

Bids are to be submitted before December 19 and DPP expects to award the framework contract in the last quarter of 2023.

The expected total value of the contract is Koruna 15bn ($US 633m) for the maximum order of 200 LRVs. For the purchase of the first 20, DPP plans to arrange financing from the National Recovery Plan of the Czech Republic.

The tender follows two rounds of preliminary market consultation, the first launched by DPP in February.

DPP approached Alstom, CAF, Hyundai Rotem, Modertrans Poznań, Pesa Bydgoszcz, Pragoimex, Siemens, Stadler and Škoda Transportation. It received responses from eight rolling stock manufacturers in the first round, and from six in the second round.

Specifications for the new LRVs include a vehicle length of up to 32m and a total capacity of at least 220 passengers, both seated and standing. The LRVs should have a minimum of 60 seats, of which at least 60% must be forward-facing.

The high-floor area must not exceed 20% of the interior, with the low-floor area making up at least 80%. Maximum weight is 48 tonnes and the LRVs must be equipped with full air-conditioning throughout.

For its new fleet new trams, DPP requires a minimum warranty of 36 months and a service life of at least 30 years from the delivery of the last vehicle in the order.

DPP will evaluate bids primarily on price, giving a weighting of 50% to the total cost of 200 LRVs and associated spare parts and tools.

The contract will also cover the development and licensing of maintenance software, as the new LRVs must be equipped with diagnostic and fault monitoring systems, as well as technical documentation and training for DPP staff operating and maintaining the new fleet.

Two new light rail lines are currently under construction in Prague, from Modřany to Libuš and from Divoká Šárka to Dědin, and DPP is planning and developing another 10 of which half could be built in the next five years.

“We have been intensively repairing and expanding the tram network in Prague for the past four years, so the fleet also needs to be modernised and expanded,” says Mr. Adam Scheinherr, deputy mayor of Prague and chairman of the DPP supervisory board.

“The last new trams for Prague were ordered over 17 years ago. We will need more trams to operate the lines we are building or which we will start building soon.”

Scheinherr also points out that the Prague fleet still contains high-floor vehicles. “That's why we want to provide 200 new trams for the people of Prague and all passengers, which will be barrier-free, comfortable, air-conditioned and quiet."