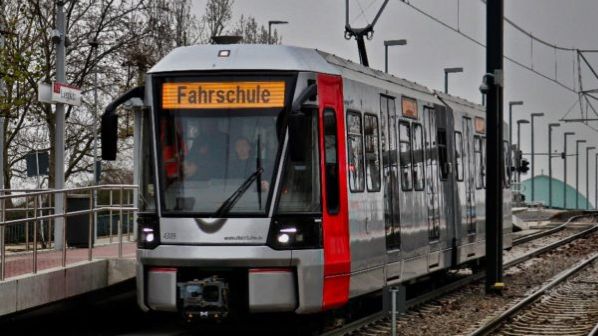 The problems were identified during welding of the underframes of the high-floor vehicles. Bombardier has appointed an independent technical supervisory authority to provide a second opinion of the steel samples, which will determine the safety and longevity of the vehicles. The results of this process will decide if any modifications to the vehicles are required.

Rheinbahn received authorisation to operate the vehicles with passengers in June. Test with drivers has been taking place since the start of the year. So far seven vehicles have been delivered. However, the plan to deliver a further nine to enable Rheinbahn to increase the frequency of U75 services to seven-and-a-half minute headways from October are now on hold along with accelerated delivery of the remaining 26 LRVs from the €167m framework 2015 order.

In a separate incident, tests of the vehicle found that the vehicle’s automatic step, which is able to adjust to the varying platform heights on the Düsseldorf network, was not performing as expected. Bombardier believes it is a software error, which it is confident of correctly quickly once the cause is identified.

“The quality and safety of our trains is our top priority, therefore we take the concerns of Rheinbahn about the operation of the HF6 vehicles very seriously,” Bombardier said in a statement. “Immediately after they surfaced, we arranged for an independent quality and material inspection. We are in continuous exchange with Rheinbahn regarding the ongoing inspections and are convinced that we will be able to respond promptly to any questions that arise.”

“The latest developments are currently putting a heavy strain on our relationship with Bombardier,” Mr Michael Richarz, Rheinbahn CEO said in a statement. “We have to assume that the vehicles were not produced in the contractually agreed condition.

“We asked the management of Bombardier to deal with the matter immediately and transparently. For the time being, we will therefore no longer accept any more vehicles, coordinate closely with the technical supervisory authority and reserve the right to assert further claims.”

In an interview with Rheinische Post, Richarz said identification of the issue is a sign that quality assurance processes which the operator has introduced are working.

The HF6 LRVs were ordered by Rheinbahn as part of a joint order with Cologne Public Transport (KVB) which ordered 20 sets. The Rheinbahn vehicles are replacing GT8SU trams and were initially due to be delivered in 2017-20. They were assembled at Bombardier’s Bautzen plant in eastern Germany with bogies coming from the company’s Siegen facility.

Rheinbahn is currently tendering for the delivery of 91 LRVs in cooperation with Duisburg Transport Company (DVG), which will receive 18 vehicles. The contract includes options for 42 vehicles for Rheinbahn and two for DVG. The new vehicles will replace the Rheinbahn’s fleet of B-car fleet delivered between 1985 and 1993, which operate on all U-lines apart from the Wehrhahn Line.