THE second of two locomotives built in China by CRRC Zhuzhou for use on a trial basis by DB Regio arrived in Germany on December 12. 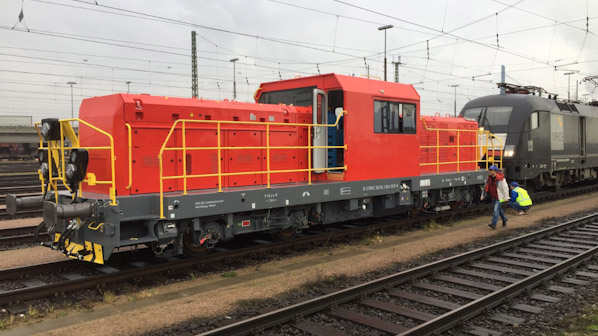 The locomotive was unloaded from the container vessel MV Titan at the HHLA Burchardkai (CTB) terminal in Hamburg docks and was then moved by rail out of the docks on December 20.
The locomotive will be used by DB Regio subsidiary S-Bahn Hamburg for shunting at its Hamburg Ohlsdorf depot and will also be used to haul works trains on the Hamburg S-Bahn network.
According to lettering on the locomotive the unit is owned by CRRC’s Vienna-based European subsidiary CRRC ZELC Verkehrstechnik.
CRRC displayed what it presented as one of four locos on order for S-Bahn maintenance trains for German operator DB at InnoTrans in September. However, it has since become apparent that this locomotive, plus the unit delivered in December, are trial pre-production locomotives on lease to DB from CRRC. Both will be used by S-Bahn Hamburg for two years.
Four 750kW diesel-battery hybrid locomotives were ordered from CRRC Zhuzhou earlier in 2018, with options for up to 16 more. The production locomotives will be equipped with lithium-titanate batteries capable of generating 150kW of traction power (or with the 250kW diesel engine a combined 400kW).