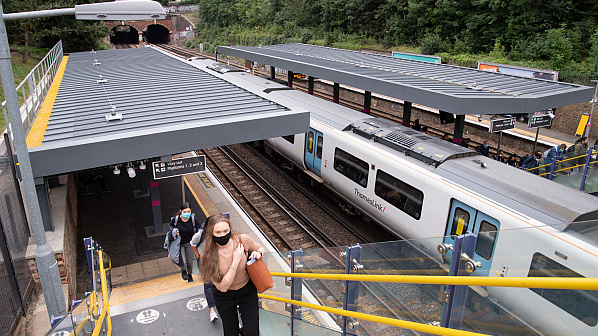 DENMARK Hill, in south London, is the first station upgrade in Europe to use photovoltaic film solar panels to produce more power than the building consumes.

British infrastructure manager Network Rail (NR) says the £7.5m extension of the station is “the first carbon positive upgrade of its kind at a station in Europe.”

The British government funded the majority of the project via the Department for Transport, with the aim of relieving station crowding.

The BIPVco Flextron thin film is fitted to the station roof and returns the energy into the electricity grid. It is 3mm thick, weighs 3kg per m2 and require no extra weight support. NR says the solar panels are shatterproof and have a self-cleaning Teflon-like top sheet that requires no ongoing maintenance. NR says the technology also generates a higher energy yield in shadow and shading conditions than conventional solar panels.

NR plans to use the technology at other stations in the future.