The service is the first to be launched under an agreement between the four national railways from Austria (ÖBB), Germany (DB), France (SNCF) and Switzerland (SBB). 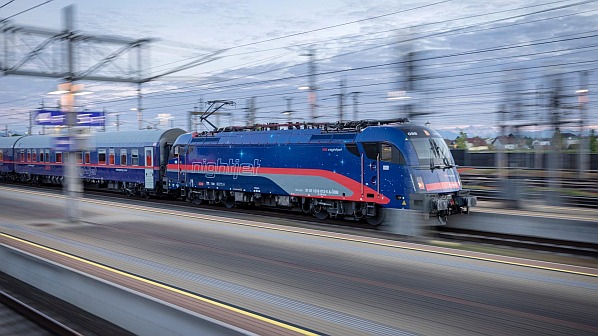 Tickets are on sale for the first trains, which will start operating on December 13.
Photo Credit: OBB.

The train will depart from Vienna Main Station at 19.40 on Mondays, Thursdays and Saturdays and will run via St Pölten, Linz, Salzburg, Munich, and Strasbourg before arriving at Paris Gare de l'Est at 09.42. The return service from Paris to Vienna will operate every Tuesday, Friday and Sunday. The direct train revives the route of the Orient Express, which operated until 2007.

The Vienna - Munich - Paris and Zurich - Amsterdam service, which is also due to launch in December, are the first connections launched under a partnership between ÖBB, DB, SNCF and Swiss Federal Railways (SBB), agreed at the end of 2020, to expand the European night train network. The partnership also plans to launch a Vienna/Berlin - Brussels/Paris service in December 2023, and a Zurich - Barcelona route in December 2024.

“With the Nightjet from Vienna to Paris, we are setting another milestone for a European night train network,” says ÖBB CEO, Mr Andreas Matthä. “Only with additional direct connections can we encourage even more people to switch to the train. A journey with the Nightjet not only protects the environment, but also offers a special travel experience. Because nothing is as relaxing as arriving at your desired destination in the city centre in the morning. I am delighted that we will now also be able to do this in Paris from December.”

“I am delighted about the cooperation with ÖBB and DB, which makes it possible to connect Vienna and Paris even more closely,” he says. “This new night train connection is a real ecological commitment to more rail transport and Europe. Travelling by train means choosing a means of transport that produces 50 times less CO2 than a car journey and 80 times less than a flight.”

“Europe should grow even closer together, also by rail,” says DB board member for passenger transport, Mr Berthold Huber. “This is what the new ÖBB, SNCF and DB night train between Vienna and Paris stands for. Together with our European partner railways, we will significantly expand the night train network. In the coming years, we want to connect 13 European metropolises with each other overnight.”

The May 2021 edition of IRJ includes a detailed feature on the Night train renaissance. Website subscribers can read the feature here.