HIGH-speed rail might still make sense in the United States in the densely populated Northeast Corridor and among certain high-population city-pairs 400-800km apart - too far to drive easily, too short to fly conveniently - if costs can be kept under control. But future high-speed rail projects would do well to avoid seven mistakes that have caused an indefinite delay to California’s system. 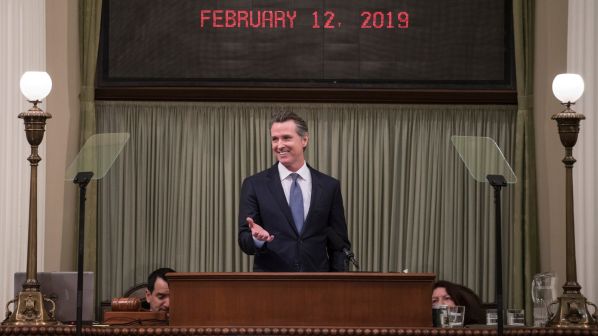 California governor Mr Gavin Newsom’s announcement on February 12 that he was curtailing plans to construct a state-wide high-speed rail system - instead only completing the Merced to Bakersfield section for which funding is already in hand and construction is underway - leaves a lot of people wondering if the failure of this project in the richest state in the US means that high-speed rail is doomed throughout America.

However, many of the problems that have led to the apparent failure of the California project are unique and don’t necessarily apply to other projects.

Legally defining project parameters in ways that can never be changed. In 2008, California voters approved Proposition 1A, which enacted a new law authorising construction of the high-speed rail system and the issuance of $US 9bn in bonds to fund planning, design and construction. However, the law enacted by Proposition 1A was exceedingly detailed, and prescribed the route, minimum speed between each set of major destinations, number of stations, headway times and other metrics.

In addition, in California, laws enacted by ballot initiative can never be amended by the state legislature without going back to voters (see Article II, section 10 of the state constitution). This meant that the project could not evolve to fit budgetary and other realistic constraints without inviting lawsuits based on the text of Proposition 1A, which the State Auditor said caused many of the construction delays. It is uncertain if California can ever construct a system that meets the terms of Proposition 1A, which includes a requirement that the finished system “will not require a local, state or federal operating subsidy.”

Using different types of dollars for your cost estimate and your pay-for. California voters were told in 2008 by the California High Speed Rail Authority (CHSRA) that the entire 1300km system (including extensions to Sacramento and San Diego) would cost $US 40bn and that they were being asked to put up $US 9bn in state bonds for their share of the project cost.

This, naturally, led voters to assume that their bond issuance would pay for about 22.5% of the cost. But the construction cost estimate was in constant 2007 dollars that would inflate with time and delay. The $US 9bn in bonds, by contrast, was a fixed amount that would never go up. Since summer 2008, the evolving cost estimates have led to the scrapping of the Sacramento and San Diego extensions and the cost estimate of the remaining 400km now at $US 77bn in year-of-expenditure dollars. But the Proposition 1A bonds still only raise $US 9bn, which is now less than 12% of construction cost of the truncated system. Dedicated revenues for a proposed project should always be compared with the same kind of dollars used in the cost estimate.

Relying on non-existent, hypothetical funding sources for the bulk of your capital costs. CHSRA was telling voters in autumn 2008 that “Federal funding sources are needed for 25-33% of the construction cost. The targeted federal funding would come in part from existing programme funding sources, but would also require the creation of new grant allocation programmes designed specifically for high-speed trains,” (emphasis added).

CHSRA then made a broader leap for the remainder of the funding, saying that its finance team “anticipates that the commitment of state and federal dollars will attract private sector funding.” The federal government did not create any such programmes with guaranteed, multi-year funding, and after a burst of one-time federal appropriations in 2009, no federal dollars have been forthcoming since. Nor has the private-sector money materialised.

It’s probably bad practice to predicate your entire programme strategy on a future Congress creating a new programme just to fund your project, funding that programme fully, and then having that money in turn attract outside funding.

Appropriating funds with a short deadline for greenfield projects and untried technologies. Out of the blue, the February 2009 ARRA stimulus law appropriated $US 8bn for a new high-speed and inter-city passenger rail grant programme, at the behest of White House chief of staff, Mr Rahm Emanuel. Emanuel stunned Congressional appropriators on the last night of the House-Senate conference by demanding $US 10bn for an untried programme that had only received $US 300m in the House bill and $US 2.25bn in the Senate version. His demand was eventually downsized to $US 8 billion in the final law.

This decision by the White House and Congress in turn led to a lot of bad decision-making down the line by forcing the Department of Transportation to give money to projects that were barely in the design phase and for which the technology did not yet exist in the US, lest the money be forfeited. (Yes, high-speed rail was a tried-and-true technology overseas, but none of those systems could be purchased “off the shelf” and installed in the US because they did not meet our safety standards, and those safety standards were not changed until three months ago.) This deadline from the ARRA law then led to the next three worst practices associated with this project.

Committing federal funds for construction of a project that is clearly not ready for construction. Because of the deadline pressure from the stimulus law - and because the new Republican governors of Florida, Wisconsin and Ohio returned their share of the $US 8bn upon taking office in early 2011 – the Department of Transportation (DOT) wound up giving $US 2.6bn of ARRA’s $US 8bn to the California project. They then followed that up with another $US 929m of fiscal year 2010 appropriations enacted a few months later. A full $US 3bn of that $US 3.5bn was dedicated to construction, despite the fact that none of the environmental analysis was complete and that the financing plan for the project was still sketchy. (In the CHSRA April 2010 update, the Authority only anticipated reaching a record of decision on the relevant segments by autumn 2011. It actually took until June 2014.)

By contrast, the federal programme that funds new subway and light rail systems (the §5309 Capital Investment Grants programme) requires that all proposed new projects get their environmental clearances first, and only then can they try to put their funding package together with additional engineering, and only after that can they actually apply for federal construction dollars. The California project could never have received federal construction funds if the high-speed rail programme had been run like the mass transit new-starts programme.

Committing federal funds for anything less than an operable segment of a new system. Another key feature of the “new-starts” (Capital Investment Grants) programme for new metros and light rail systems is this: When building a new system where none yet exists, the federal government cannot fund construction of anything less than a “minimum operable segment” (MOS), which is defined as: “The MOS must be able to function as a stand-alone project and not be dependent on any future segments being constructed.”

Congress, regrettably, did not include any such minimum standard for the high-speed rail grant programme, meaning that all the Federal Railroad Administration (FRA) had to do before committing construction money to a project was to satisfy a general requirement of the National Environmental Policy Act that any project demonstrate “independent utility.” FRA has given $US 3bn in federal construction money to the Central Valley Segment, which (a) is not guaranteed to connect to anything else, ever and (b) has no money in its budget to actually buy high-speed trains.

Yet the FRA has stated that the Central Valley Segment has independent utility, even if the rest of the state high-speed system is never built, because existing Amtrak trains could use the new high-speed rail lines at up to 193km/h (up from the previous 127km/h), along with the safety benefits that come from using the new track without grade crossings. The Central Valley Segment, by itself, is clearly not operable as a high-speed rail system, and could not have received federal construction funds if the high-speed rail programme worked the same way as the mass transit programme.

Allowing the state to spend all the federal funds first. Standard federal practice for matching grant programmes is for every dollar spent to have the same federal-state match. If the project agreement calls for a 60:40 federal-state match, then for every dollar spent, the state must produce 40 cents of its own money to match 60 cents of federal money. This ratio stays the same from the first dollar spent to the last dollar spent, and in this way, it ensures that both the federal government and its state/local partner have the exact same proportion of “skin in the game” through every step of the project.

But the ARRA deadline pressures, and the delays, eventually made it clear that the Central Valley Segment was not going to be completed by September 30 2017, the date on which all unspent ARRA appropriations would vanish in a puff of smoke. So, California asked DOT in the spring of 2011 for permission to spend the ARRA funds first, and then spend the state share later, after the 2017 deadline.

At first, DOT said no, that this was bad practice and put the project in “serious jeopardy.” But in December 2012, DOT changed its mind and allowed California to spend all of its ARRA money first and then come up with its state match-funding later, which it did.

By allowing California to spend the federal money first, the state essentially went into debt to the federal government. As the State Auditor report pointed out, if California can’t complete construction of the Central Valley Segment by December 2022 (the deadline in the latest FRA grant agreement amendment), “it may need to repay $US 3.5bn in federal funding, $US 2.6bn of which it reports it has already spent.” This is why governor Newsom made a point of saying on February 12 that CHSRA had to finish building the Central Valley Segment, even if it never connects to anything else, because “I am not interested in sending the $US 3.5bn in federal funding that was allocated to this project back to Donald Trump.”

This article was published on February 13 on the Eno Center for Transportation website. It is re-posted here with permission. The views expressed are those of Jeff Davis and do not necessarily reflect the views of Eno.