THE Norwegian minister of transport, Mr Ketil Solvik-Olsen, has announced the introduction of additional services on the Østfold line to help ease congestion and delays on the route, as well as improvements to the Wi-Fi accessibility on some trains. 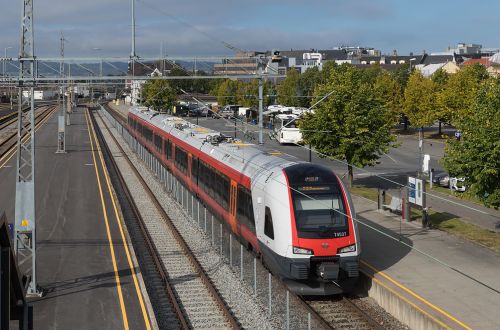 The new services will expand capacity on the Østfold line.

He says the main challenge is the capacity of Line L2 between Ski and Stabekk, which is often full leading to long dwell times at the stations creating delays that propagate throughout the system.

There has also been an increasing demand to travel countercurrent, with more passengers heading south in the morning and north of the afternoon, especially to and from Ås.

The additional services include:

The improvements will provide half-hourly frequencies during peak hours in both directions on line L21 to and from Moss, Vestby and Ås. Kolbotn also gets more departures during peak hours, with the changes relieving pressure on trains between Ski and Stabekk. The Norwegian Rail Directorate is also looking at cost of introducing double-deck trains on the route, with the assessment due in autumn.

Mobile phone operators and Bane NOR have improved mobile network coverage along with line, including inside tunnels, but the body structures on some older trains used on the route have been found to be too dense to support a strong internal signal. Reception equipment such as repeaters are being installed on some trains to combat the problem, primarily on the slightly older Inter-City traffic trains runningon the Oslo - Halden route. Stadler Flirt trains operating on the Østfold line between Oslo and Mysen and Oslo and Moss already have this equipment installed.