SPAIN’s infrastructure manager, Adif has awarded a €722,967m contract to Sener to draw up plans to remodel the track layout at Madrid Atocha Cercanias station. 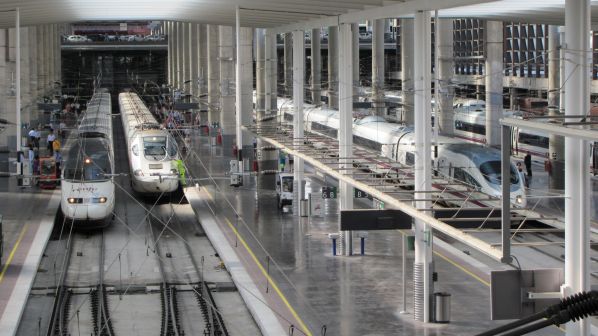 Madrid Atocha station is divided into a long-distance section (pictured) and a cercanias section for suburban and medium-distance services.

The objective is to increase capacity for trains travelling north from Madrid Atocha Cercanias and entering the Sol cross-city tunnel.

Atocha Cercanías station currently has 10 tracks which are grouped to connect with three cross-tunnels:

Atocha Cercanías station is mostly used by commuter trains, although broad-gauge medium-distance trains travelling from Madrid Chamartín to southern and eastern Spain also call at the station. These trains must be routed to Villaverde Bajo via the Sol tunnel and are restricted to tracks 5 to 7.

In addition, medium and long-distance trains, which have longer dwell times, occupy track 7 for long periods, which delays trains from Sol trying to access Atocha Cercanías.

To increase capacity and improve operational flexibility, Adif has decided to reconfigure the track layout so that trains using the Sol tunnel will have access to tracks 5 to 8, one more than now. This will be achieved by reducing the number of tracks connected to Ambassadors tunnel to two (tracks 9 and 10).

As a result, the capacity of the Sol tunnel, which is used by commuter lines C-3 and C-4, will be increased. Adif will also be able to minimise the impact of incidents on train operation.

For more information on railway projects, subscribe to IRJ Pro.