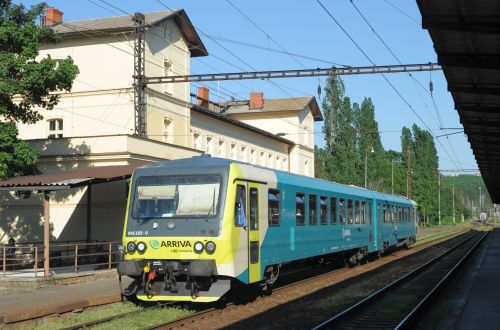 Arriva will initially use former DB class 628 DMUs on Line S41 but plans to switch to electric trains in 2020.
Photo Credit: Quintus Vosman

The contract has a duration of 10 years and Arriva will take over operations from incumbent Czech Railways (ČD) with the start of the 2019 timetable on December 9.

Prague Integrated Transport Authority (Ropid) has long expressed its dissatisfaction with ČD’s performance on Line S41, which until August 9 was the last in the country to be operated by ČD’s 50-year-old class 451 EMUs. These trains had suffered poor reliability in the months prior to withdrawal and ČD frequently substituted the ageing EMUs with class 814 Regionova DMUs, which now operate all services.

Despite the loss of Line S41, ČD is widely expected to win the contract to operate the heavily-used Line S9, which links Prague hlavní nádraží with the town of Benešov 50km southeast of the capital. This route is also operated by ČD at present.

Arriva Vlaky is expected to withdraw its open-access Prague hlavní nádraží - Benešov semi-fast service, which the company has been operating at its own financial risk since February 2016.

Line S41 services will be operated by former DB class 628 DMUs (Czech class 845). Arriva Vlaky currently has six of these two-car trains, which are equipped with passenger Wi-Fi and at-seat power sockets.

Diesel operation will only be temporary however, as Prague City Council wants to use electric trains. Arriva Vlaky expects to reintroduce electric operation from 2020 and has offered to obtain appropriate rolling stock.

Freight operators are reportedly unhappy about the extension of Roztoky - Prague Libeň services to Prague Hostivař as the line is here almost exclusively single track. Metrans, which serves a large intermodal terminal at Uhřinĕves near Hostivař is particularly concerned about the impact on its international trains which use this line.

The city has therefore reached a compromise with the freight operators and Arriva Vlaky to restrict passenger operations on the Libeň - Hostivař stretch to peak hours.