RAILPROS, which is lead programme manager for the Redlands Passenger Rail Project in California, has awarded a contract to CH2M to assist with development and implementation of the $US 250m commuter rail scheme. 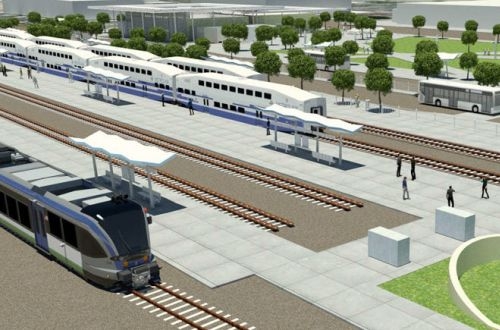 Artist's impression of San Bernardino station when the DMU service to Redlands starts in 2020.

CH2M will be involved with planning, risk management, assist with the acquisition of a fleet of DMUs, and conduct a fare collection study.

San Bernardino Associated Governments (Sanbag) is responsible for the project which is being funded by federal, state and local governments including a half-cent local sales tax.

The project entails upgrading a 14.5km railway to provide a commuter rail service between the existing Metrolink station in San Bernardino, Downtown Redlands and Redlands University, with four new stations. Final design is currently underway with a view to starting construction in 2017. The line is expected to open in 2020.

Annual operation and maintenance costs are estimated at between $US 8m and $US 10m.