TVER Carriage Works (TVZ), a subsidiary of Transmashholding, was announced on March 5 as the sole bidder for a tender launched in December 2017 by Moscow commuter rail operator Central PPK for 23 Ivolga EMUs for operation on the first of two cross-city lines of the so-called Moscow Central Diameter rail network. 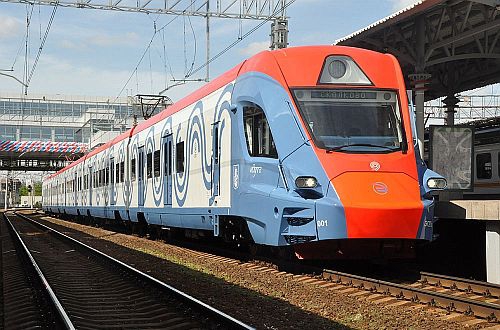 The first two Ivolga EMUs are already in operation in Moscow.

The first class EG2TV train is expected to be completed by the third quarter of this year.

Central PPK, which is a subsidiary of Russian Railways (RZD), plans to introduce the trains on Line 1 of the new network in the second half of 2019. Line 1 will be 52km long and will run from Odintsovo in the west via Moscow Belorussian and Savyolovsky stations and then head north to Lobnya, while the 80km Line 2 will run from Nahabino in the west via Riga and Kursk stations on the eastern side of Moscow then run south to Podolsk. A further 27 trains will be needed for Line 2.

The project is being implemented by the Moscow city and regional governments, Russia’s Ministry of Transport and RZD. Five more lines are planned for completion by 2025.

The Ivolga EMU is a new generation of 160km/h EMU and the first two five-car trains were completed in 2016. One train was tested on the North Caucasas Railway and the other on the Shcherbinka test track near Moscow. The two trains entered service on Central PKK’s Kiev line in April 2017.

The planned Moscow Central Diameter cross-city network. Line 1 is shown in purple and Line 2 is green.