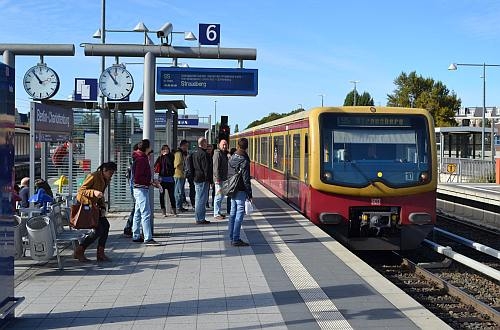 The first sub-network - the Ringbahn service group - was tendered in 2012 and attracted interest from several international bidders. However, the tender ended inconclusively as the Berlin authorities were unable to secure agreement from current operator, DB Regio subsidiary S Bahn Berlin, to provide rolling stock to alternative operators.

The Berlin S-Bahn EMU fleet operates on unique power and signalling systems and therefore transferring trains from elsewhere is not an option. Ultimately, the Ringbahn contract was handed directly to DB.

DB will also now operate the two other sub-networks for up to 11 years from December 2017, when the existing contract expires. In total the two sub-networks represent 26.5 million train-km per year.

The proposed direct award includes a series of route-by-route end dates that are earlier than 2026, the intention being to offer these routes by tender to alternative operators over the next few years.
The planned contract will require DB to negotiate terms for provision of part of the existing EMU fleet with any alternative operator judged by the Berlin and Brandenburg authorities to meet their tender criteria.
New operators will be expected to provide new-trains in the longer-term although the ex DB fleet may be used during a transition period.

The North – South service group of service covers five routes operating through the north-south tunnel between Potsdamer Platz and Friedrichstrasse. These services run south to Blankenfelde and Teltow and north to Hennigsdorf and Oranienburg. For this sub-network the contract end dates for individual routes range from May 2023 to March 2026.

The Stadtbahn contract primarily covers east-west services which run through the city centre on the Berlin East - Berlin Main Station - Charlottenburg line. For this network the individual route contract end dates range from May 2023 to November 2026.

The proposed direct award contract also contains possible extensions which would enable DB to continue operating the S-Bahn if tendering fails to find a new operator.