THE Alstom-led Gibela consortium has completed manufacturing of the first complete stainless-steel bodyshell for the 20 X'Trapolis Mega EMUs it is supplying to Passenger Rail Authority of South Africa (Prasa) from Alstom's Lapa plant in Brazil as part of an order for 600 trains. 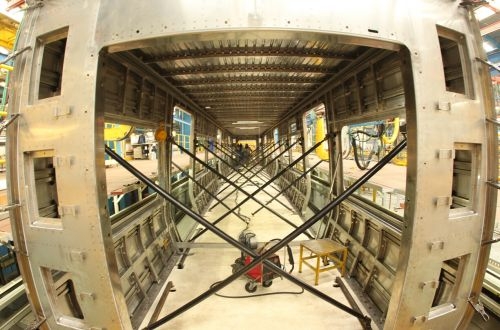 The bodyshell will now progress to the fitting phase, with the first train set to be completed by the end of 2015 and shipped to South Africa for a comprehensive testing programme before it enters revenue service in June 2016.

The first 20 trains from the €4bn order are being built in Brazil to provide necessary skills training to South African teams before production shifts to South Africa.

A purpose-built manufacturing plant is under development in Dunnottar, 50km east of Johannesburg, where work will be carried out by the Gibela consortium, in which Alstom has a 61% stake, New Africa Rail 9%, and Ubumbano Rail 30%. Ubumbano is the hosting entity in the National Empowerment Fund for the Broad Based Black Economic Empowerment partners, which was a critical element in the contract which was awarded in December 2013 and is South Africa's largest-ever rolling stock order.