A concept for the modernisation of the fleet of 238 class 423 EMUs used on the Munich S-Bahn network was unveiled by Bavarian Railway Company (BEG) and DB Regio subsidiary S-Bahn Munich on July 6. 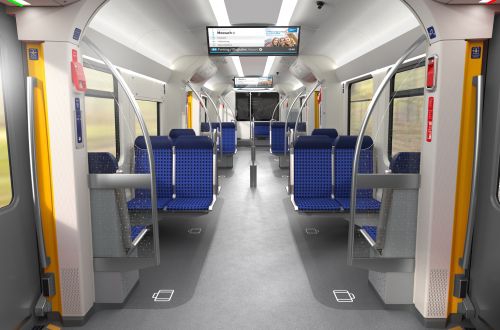 With the network already at the limits of its available capacity, a key aim of the project is to make better use of interior space, helping the system to accommodate forecast growth before the opening of the second cross-city S-Bahn tunnel in 2026.

BEG says standing passengers tend to congregate in the vestibule areas, with few choosing to stand in the aisle. This results in extended dwell times, a particular problem at stations on the congested underground section in the city centre.

Furthermore, analysis of passenger behaviour has revealed that many seats are unoccupied, even on the busiest trains, and bags or heavier luggage often make seats inaccessible.

Using these findings, BEG has joined forces with German industrial design studio Neomind to develop a new interior concept for the class 423 fleet. The new design, which has been shaped using input from rolling stock experts, market research, and passenger surveys, will increase the overall capacity of each four-car set from 544 to 612 passengers

Transparent screens around the vestibules will give the interior a more spacious feel and this area will be revised to improve standing positions, with repositioned handrails and straps. There will also be more space for large luggage, which can be stowed next to or under the seat.

The concept cuts seating capacity from 192 to 166 places, but BEG says that fewer seats will be unoccupied because of the improved passenger flow and increased luggage space.

The multi-purpose area at each end of the train will be modified to reduce conflicts between cyclists, wheelchair users, and pushchairs, with pictograms on the floor to guide passengers on how to use the space. There will also be a family or group area with a large corner bench.

Other enhancements will include a real-time passenger information system and LED lighting.

The first modernised train is due to enter service in Spring 2018 and the programme will be completed in 2020. The trains will receive an exterior repaint and anti-graffiti coatings as part of the project.

“We have used the expiry of the existing operating contract with DB Regio and the negotiations on the transition agreement to start the modernisation,” explains BEG managing director Mr Johannes Niggl. “If possible, we must avoid a situation where passengers cannot travel because of overcrowded trains. At the same time, we want to improve quality as much as possible, for example with a new passenger information system.”

BEG is seeking to introduce new trains from the late 2020s onwards as part of a new long-term contract for the operation of the Munich S-Bahn, which is currently being tendered.