TURKISH State Railways (TCDD) has confirmed that test operation will begin on August 2 on the Marmaray link between the Asian and European sides of Istanbul. 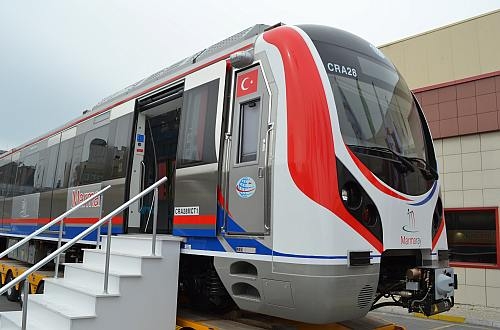 The 13.3km tunnel under the Bosphorous is due to open on October 29, the 90th anniversary of the founding of the Turkish Republic, and services will initially operate between Kazilicesme, Yenikapi and Sirkeci on the European side and Üsküdar on the Asian side until the rest of the project is completed. The line will ultimately run for 76.3km railway from Halkali in the west to Gebze in the east.

Construction began in August 2004 and Lira 5.2bn ($US 2.7bn) has been invested in the project so far. The total cost of construction is expected to be Lira 9.2bn.

The new railway is one of the first in the world to combine ERTMS and CBTC. On the surface, train detection will be by jointless track circuits, and the two commuter tracks will be fitted with both CBTC and ERTMS, while the third track will only have ERTMS. The tunnel will have both types of train control but train detection will be by axle counters. Fall-back lineside signalling will be installed throughout the Marmaray line.

The fleet of 54 Hyundai-Rotem commuter emus will be equipped exclusively with CBTC and drivers will refer only to their cab displays. Initially, only maintenance vehicles will be fitted with ETCS, but as TCDD's high-speed fleet is already equipped with ETCS they will be able to use this on the Marmaray line.