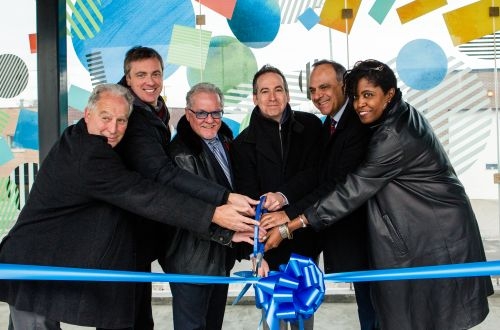 The line has 10 new stations and serves a catchment area of around 700,000 people in Montreal's eastern and northeastern suburbs. The Mascouche line has a design capacity of 5500 passenger per hour during peak periods, and more than 10,000 people have obtained free tickets to try the new service.

The trip from Mascouche to Montreal will take 65 minutes, which AMT says is hard to beat by road. The new service is expected to take around 900 cars off Montreal's roads a year.

AMT acquired 30 double-deck coaches and five dual-mode locomotives from Bombardier to operate the Mascouche line. As part of a new approach to customer service AMT will have staff on-board each train to deal with passenger enquiries.

The project cost $C 671.4m ($US 595.5m) to implement plus a risk reserve of $C 90m. Quebec's Ministry of Transport funded 75% of the cost, with AMT covering the remainder from its own resources.

Rivière-des-Prairies station on the Mascouche line.