THE first two of four additional Stadler GTW DMUs for the Capital MetroRail commuter rail line in Austin, Texas, arrived at the line’s depot on March 22. 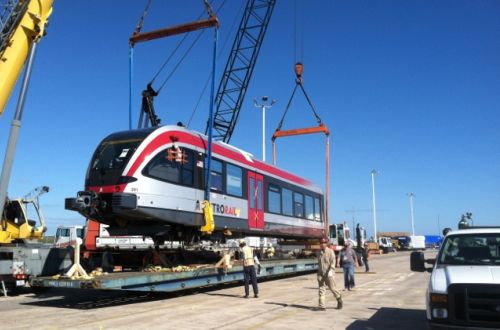 The two-car articulated trains were built at Stadler’s plant in Bussnang, Switzerland, and began their journey to the United States last month, arriving in Texas through the port of Galveston.

The trains will go through five-to-six months of testing before entering service on the 51km line from Downtown to Leander, supplementing the fleet of six Stadler GTW sets introduced when the line opened in March 2010.

The $US 28m order for additional trains was funded through a $US 50m grant from Texas Department of Transportation, which also includes $US 22m for infrastructure enhancements. This is being used to fund the construction of additional passing loops and the expansion of the Downtown terminus, which will enable the half-hourly peak service to be doubled from next year.