Testing of new Stadler EMU for Catalonia gets underway

Testing of first train will take place over the next six months ahead of entry into service on FGC’s Barcelona - Vallès line. 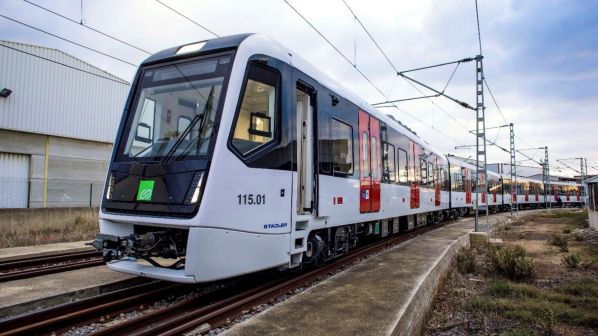 The new four-car trains have capacity for up to 775 people.
Photo Credit: FGC

CATALONIA Government Railway (FGC) has held an event to mark the start of testing of the first of 15 new class 115 EMUs for the Barcelona - Vallès line supplied by Stadler Rail Valencia.

Testing of the first train will take place over the next six months during which the remaining 14 trains from the order will be delivered at a rate of two per month.

The new trains will help FGC to increase capacity on the 48.1km route, and with 61 trains in the line’s fleet, the operator will be able to offer a metro-like frequency; a five-minute service to Terrassa and Sabadell and 2m 30s to Sant Cugat del Vallès will be available at peak times. The new fleet will also increase ridership capacity from 80 million passengers per year to 110 million. The line reported 66.3 million journeys in 2019.

“This increase of 30 million trips in the offer of the new itinerary is equivalent to 30 million climate change vaccines,” says FGC president, Mr Ricard Font. “This is also a pandemic against which, as public transport operators, we have a duty to fight. It’s our main task.”

The €99.5m contract with Stadler was placed in January 2018 and delivery was originally scheduled for summer 2020 but was delayed by nine months due to the Covid-19 pandemic.

The four-car trains feature open gangways and have capacity for 775 people including two multi-functional areas for passengers with reduced mobility. A USB connection is available at each of the train’s 196 seats. Each car has three doors on each side (24 in total) and audio and light indicators offer the status of the door with green for opening and red for closing, aiding people with hearing impairments. There are four customer information screens in each car, which are also equipped with CCTV while drivers benefit from cameras offering a 360 view of the train.

FGC says more than 200 people will be hired to support the increase in service frequency, including 100 new station agents and staff for the workshop at Rubí, which has been expanded and adapted to accommodate the new trains.

A further €22m has been invested in improving infrastructure on the line. Platforms at Plaça de Catalunya station in central Barcelona have been lengthened and an automatic entry system installed to improve the operation of trains at the station. New electrical substations have also been built at Bellaterra, Sant Cugat and Rubí, with the latter guaranteeing energy supply to the depot independent of the supply to the line. Signalling upgrades have also been carried out in Sarrià, at the Sant Cugat junction and at Plaça de Catalunya station.

FGC says it is currently operating at 60% of its pre-pandemic ridership, reporting a 1% improvement weekly. The minister of transport and sustainability, Ms Damià Calvet, emphasised the challenge facing public transport following the drop in fares revenue caused by the pandemic.

“We have to resolve this situation,” Calvet says. “We want to recover the 1 billion trips we made in 2019, but we need to reach 1.5 billion as soon as possible. And that requires funding for the deficit and to continue the commitment to investment and management.”