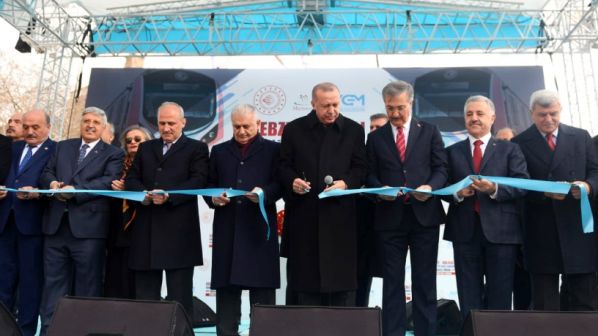 The 63km project extends the existing 13.6km cross-Bosphorous underground Marmaray rail link in Istanbul, which opened in October 2013, and allows trains to operate uninterrupted between the European and Asian parts of Turkey for the first time.

The work involved rebuilding the 19.2km line from Kazlıçeşme to Halkali on the European side and the 43.8km section from Ayrılık Çeşmesi via Pendik (the current limit of rail services from the east) to Gebze on the Asian side.

Work included reconstructing the existing double-track line to provide two tracks for Marmaray commuter trains and one track for main line trains. The additional track, which has 10 passing loops, will be used by high-speed services during the day and freight at night. In addition, 27 stations on the Asian side and 11 on the European side were rebuilt. Seven stations - Gebze, Pendik, Maltepe, Bostanci, Söğütlüçeşme, Bakirköy and Halkali - will provide an interchange between suburban and long-distance services.

The Marmaray commuter service will now form the backbone of Istanbul’s urban rail network, with trains providing an interchange at 13 stations with 16 metro and tram lines. The end-to-end journey time will be 1h 55min.

YHT high-speed services from Ankara and Konya, which were only able to reach Pendik to the east of Istanbul, will be extended to central Istanbul and the European side of the city on March 13. Turkish State Railways (TCDD) will extend all YHT services beyond Pendik to Bostanci and Söğütlüçeşme on the Asian side of the city, while two Ankara services and a daily Konya train will run through to Bakirköy and Halkali on the European side.

Freight trains have been using two train ferries to bridge the gap in the rail network through Istanbul. Completion of the Marmaray project means that freight trains will now be able to cross the Bosphorous by rail for the first time.

The second phase of the project was originally supposed to be completed at the same time as the tunnel under the Bosphorus. It was then rescheduled to open in 2015, but work came to a halt in 2014 due to problems with the contractor. In the meantime, the tracks were removed isolating Istanbul from the rest of the Turkish rail network. Construction only restarted in 2017.